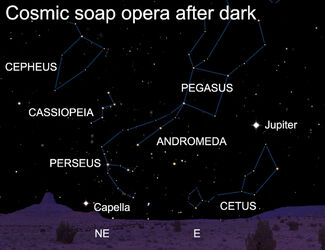 Centuries ago, before today's light pollution, many people enjoyed gazing at the night sky; they could recognize many of the stellar patterns there, and they often knew the mythology associated with them.

Did you ever wonder what folks did for entertainment before we had television and social media? Well, before TV and the internet there was radio. And before radio – long before radio – there was... well... the sky.

People decades or centuries ago didn't live in large, brightly lit urban areas like most do today. They enjoyed gazing at the night sky; they could recognize many of the stellar patterns there, and they often knew the mythology associated with them.

This is far from true today. After dark, most of us retreat to our illuminated cocoons and rarely step out to enjoy the nighttime sky. I'm always amazed when visitors to my small desert town gaze skyward and exclaim something like "Oh, my gosh... look at all those stars!"

It wasn't always this way. It's quite likely that the constellations themselves began as mechanisms by which ancient people could tell stories and pass them on to future generations. In fact, several such star groupings depicting one of the most interesting and convoluted of all such yarns – a true cosmic soap opera – appear now shortly after dark.

This story features a lovely young girl named Andromeda, princess of Ethiopia, and her parents Cepheus, the king, and Cassiopeia, the queen. Because of her magnificent beauty, Cassiopeia was a remarkably conceited woman and bragged that she was far more gorgeous than Juno, queen of the gods. To avenge this insult, Neptune sent a sea monster (possibly Cetus, the whale) to ravage the coastal areas.

Horrified by the unfolding events, King Cepheus learned that he could appease Neptune by sacrificing his beautiful daughter to the sea monster, so he arranged for Andromeda to be chained to a rock on the coast, fully exposed to the wrath of the beast. Nice guy! Had there been television back then, I suspect this surprising turn of events might have marked a great place for some dramatic music followed by the words "To be continued..."

Fortunately for Andromeda, Perseus happened to be flying by on his mighty steed Pegasus when he saw her chained to the rock, her exquisite silken hair blowing in the breeze. He immediately was enamored and cried out to her: "You should not be wearing such chains as these; the proper bonds for you are those which bind the hearts of fond lovers. Tell me your name, I pray, and the name of your country, and why you are in chains."

At first, she was silent, but when Perseus persisted, she revealed her identity and how her mother had been so vain about her own beauty. As she spoke, the sea monster rose angrily from the deep and the girl screamed in terror.

Perseus shouted to Andromeda's parents that he'd slay the monster if they would give to him their daughter's hand in marriage. Of course, the frightened parents consented; Perseus killed the monster, freed Andromeda, and they were married

Today these characters and many others are immortalized among the starry heavens. To find them this week simply turn off the electronics, hop in the car, drive to a dark, rural location, and enjoy the night sky and its wonderful stories!