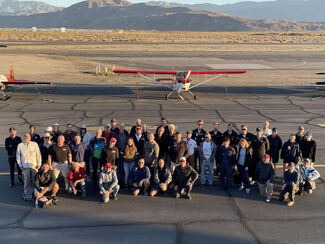 The smell of aviation fuel, the sound of planes soaring through the sky, the sight of pilots doing death defying stunts, the feeling of thrill. Akrofest 2022 was back in Borrego Springs, with 38 pilots competing from near and far, showcasing their aerobatic skills in the International Aerobatic Club Chapter 36's annual Akrofest Competition, Oct. 28 and Oct. 29.

"The weather was absolutely perfect. That's probably my favorite part of Borrego: the community comes together for events in a way that just doesn't happen in other places – especially big cities," Competition Director Bryan Jones said.

The chapter touts their aerobatic box as "the world's finest aerobatic box – built to CIVA standards, designed to host the world championships, and practically visible from space."

Each year, IAC36 hosts two of the largest aerobatic contests in the country – Hammerhead Round Up and Akrofest; both held in Borrego. Both contests are normally the largest regional contests of the year in the United States.

"We'' be back on April 13 – 15 for our spring contest and we're coming in force," Jones said. " Our goal is to beat the all-time attendance record for a regional contest and I hope to have more Unlimited pilots flying the 4-Minute Freestyle."

He also said he would like to give the crowd a say in who wins that flight, as he was able to "talk to many people this time and everyone had strong opinions on who the best pilot was."

Over Akrofest weekend, 38 pilots, many first-time competitors, competed in multiple categories, with precision flying of their very powerful yet agile aircraft, attempting to impress the judges, who were socially distanced across the runway at the Borrego Valley Airport, with Chief Judge Michael Church at the helm, along with a dozen non-flying volunteers.

Jones' students all flew their first contest: Priscilla Marapodi, Shaun Dawson, and PJ Pecuch. Shaun and PJ even took 3rd and 2nd in Primary, out of 11 pilots in that category.

Some maneuvers proved difficult for pilots as they attempted to be as perfect as possible, trying to stay within the box to complete a set pattern, as glitches, no matter how tiny, whether it is a slightly too early turn or flying out of the box, can cost them points. Advanced pilots are able to fly at an altitude-minimum of 100 meters, along with nose-dive stunts.

A few pilots were missing in action as the National Championships just took place, two weeks prior to the contest, which drew a lot of their regular pilots, Jones said.

Jones also flew himself, coming in third place in the Intermediate category.

One of the most anticipated categories was the four-minute freestyle, which has no limit to the number of style of figures that can be flown with smoke and music in order to add points for presentation. The competition consists of flying for four minutes. Any long or shorter could be subject to penalties that can drop a pilot from first to last. However chaotic it may look to the spectator, it is judged to standards like the rest of the competition.

Wilder is a member of the 2022 U.S. National Unlimited Aerobatic Team that will represent the United States at the World Aerobatic Championships in Poland.

The International Aerobatic Club is a national organization that promotes the sport of precision aerobatics. IAC is organized into local chapters that provide training and host contests. IAC 36 is the chapter for Southern California.

IAC 36 was founded in 1975. Hundreds of pilots have started their aerobatic careers with us and many of them have gone on to compete at the world championships, and is also one of the most active chapters in the country.

(This award goes to the pilot with the highest presentation score. The award is named for Reinaldo Beyer, a phenomenal aerobatic pilot who died in an aircraft accident.)