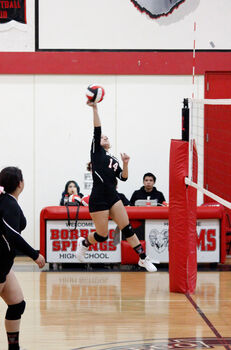 With one more point to go to seal the win in the last set, it was quite the nail biter, having many in the stands on the edge of their seats. The Julian Lady Eagles were not going down without a fight, making way for a comeback to force another set. However, with a tip just outside, the Lady Rams of the Borrego Springs volleyball team managed to seal the win, 25 – 16, 25 – 7, and 25 – 23 on Oct. 19 at home.

This was the Lady Rams last home game of the regular season and the team's senior night.

With the win, the Lady Rams finish the regular season with a 14 – 6 overall record and an undefeated 10 – 0 record in the San Diego Section Manzanita League.

Last season, the team finished 12 – 10 overall and 4 – 2, second behind West Shores in the Southern Manzanita League.

The team finished in first place back in 2014 and made it to the playoffs, advancing to the second round.

The Lady Rams had a solid start to the first set, leading 5 – 0 after a quick side out and consecutive aces by senior Jimena Ochoa.

The Lady Eagles managed to tack a couple on after an error and a solid hit to the middle. After some back-and-forth, the game was within two, 7 – 5, Lady Rams up.

Sophomore Abigail Gonzalez had a solid kill, followed by consecutive aces to put the Lady Rams up 10 – 5.

The Lady continued to extend their lead 20 – 10. However, miscommunications and errors continued to prove costly, as the Lady Eagles began to chip away, getting within four, 20 – 16.

But with back-to-back aces by sophomore Ailene Arias, a kill by Gonzalez and hits, the Lady Rams came away with the win, 25 – 16.

The team started right where they left off in the second inning, as Ochoa had three consecutive aces to give the Lady Rams an early 3 – 0 lead. Then it was a hustle at the net with a good save by freshman Janessa Nehrer from her knees to keep the rally alive, as Arias managed to get the ball over the net for the point.

Ochoa once again with solid aces, followed by a kill, 7 – 0.

The team continued to run away with the lead as many things were working on all cylinders for the team – from patient hits to good communication.

The Lady Eagles were finally on the board after a service error.

Nehrer, Ochoa and Arias contributed kills and aces, and Lady Eagles errors to help push the lead. Errors began to catch up to the Lady Rams, but the lead was too significant for much of a comeback.

The third set started off much different than the first two, as the Lady Eagles were on the board first with an ace.

It was the team's first lead the whole game.

It was a "serve battle" to begin the game as both teams exchanged an ace and an error.

Then it was much back-and-forth, anybody's game and set, until the Lady Eagles found some rhythm and was up by four, 8 – 4.

The Lady Rams continued to chip away, but were quickly answered back by the Lady Eagles, who maintained the lead.

With the game tied at 10, the Lady Rams managed to get consecutive hits, and a kill and an ace by Ochoa to go up by five, 15 – 10. Then the set remained close as both teams went back-and-forth. A kill by Ochoa, the Lady Rams were one point away to seal the set, 24 – 19.

However, the Lady Eagles would not go down that easily.

Point-after- point, it seemed the set was slipping away. Little mistakes and over hits were not going in favor of the Lady Rams.

With a smart move by the Lady Rams to not touch the tip heading out of bounds, finally getting that last point and sealing the win with a sweep, 25 – 23.

The Lady Rams have managed to overcome obstacles throughout the season, working through the minor errors and mistakes.

After the game, the team recognized its two seniors, as well as three foreign exchange students.

The team only loses two seniors this year, and has a solid core for next season with hopes to continue this current hot streak.

The Lady Rams are playoff bound and are set to play Coastal Academy at home on Oct. 26, 6 p.m. Tickets can be purchased online at gofan.co/app/school/CA22778.