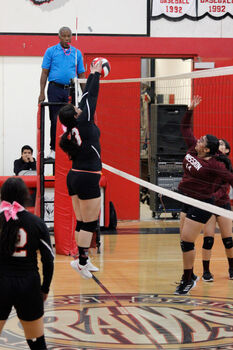 Sophomore Ailene Arias goes up for a big block at the net.

After dropping the first set to Calexico Mission, the Lady Rams came back to take the next three, then followed a sweep of West Shores in three.

The team is currently 10 – 6 on the season, and sitting atop the Manzanita League standings with a 5 – 0 record.

In their previous meetings against Calexico Mission and West Shores, Borrego Springs managed to earn the win in both.

Against Calexico Mission on Oct. 5 at home, the Lady Rams started off slow in the first set, as they trailed 3 – 0.

The Lady Rams were then on the board after a kill by senior Jimena Ochoa, 3 – 1.

The set went back-and-forth, but Calexico Mission managed to hold on to the lead.

Once again, the game continued to go back-and-forth, and the Lady Roadrunners managed to find the weak spots for the Lady Rams, taking back the lead, 21 – 17.

The Lady Rams managed to get within one, with multiple bumps and digs in the right areas, along with back-to-back aces by junior Irene Ruiz, 21 – 20.

However, errors and miscommunications proved to be a sore spot, and Calexico Mission took back the lead, closing with an ace, to seal the first set win.

In the second set, it was the Lady Rams who were on the board first with back-to-back aces by Ochoa. However, the Lady Roadrunners quickly answered right back to tie it up at two, before an error gave the Lady Rams the lead right back, 3 – 2.

Junior Mariana Torres and Ochoa added to the lead with an ace and kill, respectively.

Then Torres found a groove that Calexico Mission just could not get past, as she served seven consecutive aces, before they could get the ball in motion, but Ochoa once again with the kill. The Lady Rams had a comfortable 13 – 2 lead.

But in many games, no lead is really ever safe.

The Lady Roadrunners found themselves in a rhythm of their own, going on a 7 – 0 run to cut their deficit to three.

But a couple of errors and aces cut the deficit for Calexico Mission, as they would not go away quietly, and were down by just three.

Then with errors and a ball hit out by Calexico Mission gave Borrego the last three points to take the second set win to tie it 1 – 1.

The Lady Rams were once again up on the board first in the third set with a kill by Arias and ace by Ochoa, 2 – 0.

Then the back-and-forth began once again, but the Lady Rams managed to hold the lead, 10 – 4.

The Lady Roadrunners continued to fight right back into the game, but were still trailing.

Holding steady to the lead, Gonzalez also added a couple of aces.

The Lady Rams found ways to get around with solid hitting, working on all cylinders, and tips by Arias, an ace by Ochoa and kill by Gonzalez sealed the third set to give the Lady Rams a 2 – 1 lead.

In hopes of closing it out in the fourth set, the Lady Rams knew they had to work on all fronts to avoid a fifth and letting their streak break.

To start the fourth set, the pressure was high.

Both teams exchanged ties with thrilling rallies before it was the Lady Rams to pull ahead with a 7 – 4 lead.

But errors seemed to catch up to the Lady Rams at the Lady Roadrunners advantage, who tied the game at 9, and eventually took the lead.

But tips by Arias and three consecutive aces by Ochoa put the Lady Rams back on top, 14 – 11.

It really was a game of aces and solid kills for the Lady Rams, also taking advantage of the minor errors made by the Lady Roadrunners, as they continued to add to their lead, 20 – 13.

However, once again, Calexico Mission suddenly found a groove, cutting at their deficit to just one, 20 – 19.

But a kill by Gonzalez, followed by errors and a volley by Ochoa, the Lady Rams escaped the set with the win, sealing the game 3 – 1.

It was a hard fought win for the Lady Rams who continue to be working together all around the court, finding a much better momentum to go off of to seal set wins.

The team is back at home in a non-league match-up against Warner Springs on Oct. 12, 4 p.m., before traveling to face San Pasqual Academy on Oct. 14 to get back into league play.