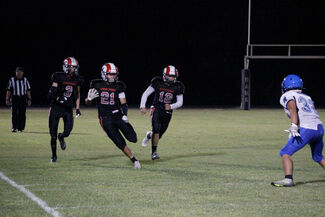 Riding a three-game win streak, the Borrego Springs Rams football team headed into its first league game at home on Sept. 30 against San Pasqual Academy with solid momentum on its side.

The Rams have not had much luck against the Dragons since the 2018 season, where the Rams won 24 – 0 in that game, and went undefeated eventually winning league.

Hoping to get past the team that head coach Tim White said was "a team to beat," the Rams had to work on stopping their quick motions and dives.

However, the Dragons understood the assignment, working on all cylinders on offense and defense, handing the Rams their first league loss, and stopping their win streak at three.

"We watched the film on them, but their grades came out, giving the chance for the return of some key players, including one who is a pretty special player who runs fast and hits like a ton of bricks. He set the tone for them. Our guys were a little shell shocked in the beginning, surprised at their speed, size, athleticism, strength; they brought it," White said.

"I'm proud of our kids. They took the second ranked team in the county's best punch and they could've folded, but they didn't and they stood tall."

The team also faced Coastal Academy in a non-league game on Oct. 7, where they were defeated 44 – 16.

Heading into that game, Coach White said they were a quality team, and hoped to get healthy throughout the week before facing them.

The teams two prior games have given the Rams a groove to ride and hope to keep that momentum high.

"Amazing performance from our team in all facets of the game – offense, defense, special teams. We really did a great job putting it together those last two Friday nights," Coach White said. "The kids worked hard all week and came out and had great games. It wasn't just a one person standing out, it was a definitely a team effort."

Against SPA, the Dragons started off on a quick foot, gaining yardage, moving down the field into Rams territory.

Despite stops inside the red zone, the Dragons quarterback rushed for the touchdown. Followed by a two-point conversion, the Dragons were on the board 8 – 0 with nine minutes left to go in the first quarter.

After a great kickoff return, the Rams had nice field position, on San Pasqual's 40-yard line.

On fourth down, the Rams decided to go for it, and sophomore quarterback Isaac Dorado ran it for the first down.

But once again, that Dragon defense continued to hold, forcing yet another fourth down, in which the Rams went for it again but junior Francisco Garcia was just a bit short, turning the ball over on downs.

With momentum still on San Pasqual's side, it showed on one of the first plays as they scored a 65-yard touchdown. The two-point conversion attempt was no good, 14 – 0.

Then it seemed momentum started to shift, as the Rams managed to recover the ball inside the 20 of the Dragons territory.

Chipping away at yardage, but it was not enough to get to the end zone, as they settled for the field goal with 39 seconds left to play in the first, 14 – 3.

Right off the bat to begin the second quarter, the Dragons scored a touchdown and converted the two-point conversion, 22 – 3.

The Rams then had something working after a long pass to junior Pedro Rodriguez for the first down.

Isaac Dorado once again found Rodriguez with a side pass for yet another first down.

However, the Dragon defense continued to stop the Rams run, forcing the turnover on downs.

Midway through the second quarter, the Dragons broke through the middle, through multiple tackles, to score another touchdown, and with another two-point conversion, added to their lead, 30 – 3.

After not being able to do much on offense, the Rams special teams managed to pin the Dragons inside the five with a great punt by senior Julio Medina. But both teams did not score again.

The Rams had a chance to change the momentum of the game in the second half, receiving the kickoff. However, after a massive miscue and failing to jump on the ball inside the 10-yard line, San Pasqual recovered the ball with great field position.

Within seconds, the Dragons scored another touchdown, but failed to convert the two, 36 – 3.

With 8:25 on the clock, sophomore Jacob Dorado had a great kickoff return to the 35 in the Dragons' territory.

A toss by Isaac Dorado to Garcia for a good run, the Rams had something going.

Then a screen pass to freshman Christopher Alcaraz, who managed to break through the hole and multiple tackles, had the Rams chipping away at yardage. But once again, the Rams were stopped by the Dragons defense.

In the fourth quarter, the Rams picked up where they left off with solid runs by Garcia and senior Adan Valdez.

With eight minutes left in the quarter and the game, a fourth down pass to Rodriguez was no good, but with a defensive pass interference penalty, the Rams had a first down and chance to score.

Midway through, the Rams finally got through the end zone with a rushing touchdown by Valdez, 44 – 10.

Both teams fought hard throughout the game, but it was the Dragons who went home with the win.

The team is back in action on Oct. 14 against crosstown rivals the Julian Eagles for another league game.

"We're gonna have the same game plan as we did the last time we faced them and hope to get that W," Coach White said. "They've had some really good wins against West Shores and Warner Springs, so they're coming in with a bit of confidence, so we just have to go in there and do what we do best."

The last time these two teams faced was in the Rams home opener, where they shut out the Eagles, 51 – 0.

The Eagles have been riding a great momentum, and are currently atop of the Manzanita League 8-Man football standings with a 2 – 0 league record.