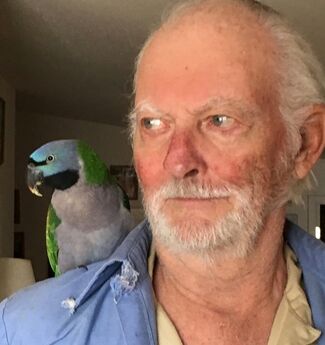 Dick Bogue died peacefully in his own bed sometime after an electrical storm the dark morning of August 11, 2021. A few hours before he died of COPD, he smiled hearing the intense summer lightning make loud claps of thunder which rattled the house.

Dick retired to Borrego Springs in the 1990s, rebuilding a steel warehouse on Peg Leg road where he could build and then fly his quarter sized model airplanes in the nearby fields in front of Fonts Point. Later he and his wife, Alice, built a house behind the shop, planting many trees and gently caring for small creatures and an extended family of ravens who called his place home.

He loved Borrego, particularly the quiet summers. The dynamic nature of the desert and everything that lived there fascinated him. Dick and his life partner of twelve years, the painter Jane Culp, spent most of their time exploring the Borrego Desert Badlands in his backyard. Dick would drive the jeep to remote nearly inaccessible canyons taking Jane painting, while he photographed the sandstone formations. Jane's painting book "Echoes of the San Andreas" was fostered and inspired by him.

Dick was born and grew up in Denver Colorado. Although he studied violin with a concertmaster when he was young, his primary calling was that of a mechanic. He had the mind of an engineer and could diagnose and repair any engine. He built and drove his own sprint car in professional races throughout the west and midwest. To support his family he opened his own auto-repair shop in his Denver garage while working as lead mechanic for Frontier Airlines. Later, after Frontier declared insolvency, he took the same job with US Air in South Carolina. Though a loner by nature Dick loved working with his team of airline mechanics and became a union organizer. He enjoyed their varied backgrounds, that none of them fit into society, "misfits" he called them.

As a boy, Dick was constantly observant. Riding his dirt bike in the mountains surrounding Denver in spring with his rough companions, Dick would jump off his bike to study belly flowers. Although seeming to be Spartan at first impression, Dick, like the Borrego desert he loved, was full of life and ever changing. He is missed.