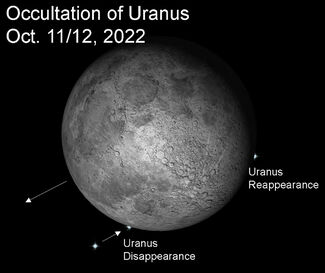 A lunar occultation occurs when the moon in its orbit around the Earth drifts in front of a more distant object – for example, a planet, star or star cluster – and blocks it from view for about an hour or so.

Go ahead. Get all the jokes out. You know you want to. I've done it too, but quite honestly, they were all much funnier in seventh grade!

In a few days the planet Uranus (pronounced YOU-rah-nus, by the way), will undergo what astronomers call a lunar occultation. Such an occultation occurs when the moon in its orbit around the Earth drifts in front of a more distant object – for example, a planet, star or star cluster – and blocks it from view for about an hour or so.

Occultations are important because they allow scientists to refine our knowledge of the moon's orbit and to discover companion objects orbiting distant stars or planets. They can even tell us something about the atmosphere of a planet as it occults it.

This week the distant planet Uranus will be the "star" of the show as the moon passes in front of it. Whether or not you can see the event depends, of course, on your weather, but also if you have a small telescope or binoculars through which to view, and if you're in the right location at the right time. It will be visible from the western parts of the U.S. (including Alaska), northwestern Mexico, most of Canada and even parts of Scandinavia.

If you've got a small telescope – or possibly binoculars – you should spot Uranus as a faint bluish-green dot on the eastern side of the moon. The moon will be pretty bright on that night, so you might have trouble spotting the planet.

As the moon drifts eastward in its orbit around the Earth, it will creep up on the planet from the west and pass in front of it. Since viewers in various locations on Earth will view the event from different angles, its times will differ from place to place.

To find the event's times for your location, call your local planetarium, science museum or observatory. Or you can visit the following website: lunar-occultations.com/iota/planets/1012uranus. Remember, though, that times there are listed in Universal Time (UT), so you'll need to convert them to your local time. To get PDT, subtract seven hours from UT. Subtract six hours from UT to get MDT, five hours for CDT and four hours for EDT.

Regardless of your location, it's always important to begin your watch at least 10 – 15 minutes early so you can watch the moon approach the planet in the sky. Spotting the planet's reappearance, however, is a bit more challenging since it's tough to know exactly where along the moon's edge it will emerge.

As you watch the occultation it may appear that the planet is drifting behind the moon, but it's the moon that is moving. On that night, Uranus will be 1.75 billion miles away while the moon will be only 240,000 miles distant, so its motion will be much more obvious.

OK, enough science. You can now return to the jokes!