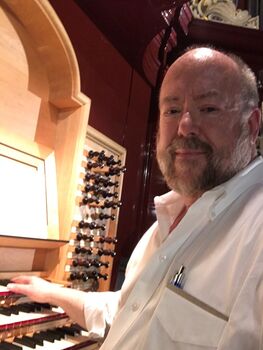 The music for the service represents the breadth and depth of music for the organ as a way to mark the first day Dr. von Gunten will serve as the organist at St Barnabas.

Service will commence with a Prelude from JS Bach, the 1st movement, Sonata I in E-flat Major. The sonatas for organ by Johann Sebastian Bach are part of the training of organists because they require the organist to 'rub the stomach while patting the head'. Three parts each going their own way.

The hymns chosen for the occasion will include the Gradual Hymn known as "De Tar" written by Calvin Hampton (1938-1984), organist at Calvary Episcopal Church, New York City before his untimely death from AIDS. The tune was named for Vernon de Tar, longtime organist at Church of the Ascension in New York City.

The service will conclude with a Postlude Processional by William Mathias, a Welsh composer most famous for composing the anthem, Let the people praise Thee, O God, written for the July 1981 royal wedding of Prince Charles and Princess Diana (Dr. von Gunten was privileged to visit patients with Princess Diana when she visited the hospice unit he directed in Chicago in 1997, a year before her death).

According to a St Barnabas spokesperson, "We are truly blessed that, upon retiring from his medical career where he was a world recognized pioneer in palliative care, that Dr. von Gunten has decided to retire in the San Diego area, and even more blessed that he has chosen to come to Borrego Springs to provide us with wonderful organ music. Sometimes God simply provides."

Dr. von Gunten recently retired from his role as a leader in palliative care where he spent his career helping patients and families have the best possible experience and live life to the fullest while living with cancer.

Upon retiring, he decided that he had time available to regularly pursue his love for music in general, and organ music in particular. Dr. von Gunten has pursued church music as an avocation for more than 40 years, beginning as an undergraduate at Brown University.

During college, he assisted in an Anglo-Catholic parish where a 16-voice mixed volunteer and paid choir sang classical repertoire including a full Missa Brevis and two anthems each week from medieval through contemporary composers.

During medical school, he accompanied a 50-voice adult choir and a 3,500 member congregation. In 2021, he achieved the prestigious Colleague of the American Guild of Organists status in 2021.

Come early for the Prelude and stay for the Postlude. And after that join St Barnabas for the Holy Happy (Coffee) Hour.