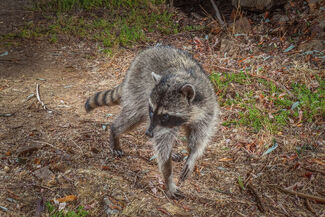 They are cute, cuddly and secretive and many people are surprised to discover that raccoons can be found right here in the desert.

While not often seen here, these fuzzy little bandits with the black mask and black and white-ringed tail often leave clues that they are here, including tiny, human-like footprints or maybe the fruit and vegetables you've worked hard growing that have vanished from your garden.

These small, bear-like creatures are admittedly cute, and have taken on a reputation as secretive, mischievous, fastidious and smart.

Even Native American cultures embrace these 15- to 20-pound furballs as tricksters in stories shared with youngsters.

The raccoon has adapted well to human interaction, with this midnight bandits most active during darkness. That's another reason they are not often seen.

The careful observer, however, will notice their tiny footprints that resemble a human hand (front paws) or foot (hind paws) left in damp soil.

The popularity of game cameras has also captured photos of the raccoon frequently in areas such as Rams Hill, De Anza and Borrego Springs Resort.

Adult raccoons are normally about two to three feet long and are easily recognized by their characteristic black mask and bushy, ringed tail.

Raccoons enjoy a broad menu, feeding on both plants and animals as well as garbage left behind by human neighbors. Natural food items may include berries, acorns, and grapes, along with mice, bird eggs, frogs and snakes.

They prefer being around water and will often wash their food before eating.

Raccoons are generally solitary creatures until mating season that typically begins in late winter and extends through spring, when the male will return to his independent ways, leaving the female to raise the youngsters.

If you are out at night, you might spot a cluster of extremely cute baby raccoons, called kits, huddling in a tree or some protected place.

Oh, about that cuddly thing. Don't let their cuteness fool you. Raccoons are wild animals, and they will bite and claw if cornered or threatened. Enjoy them from a distance and let them be.