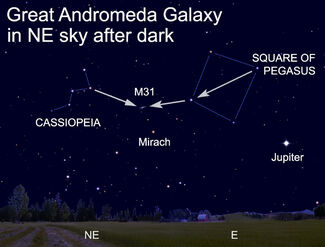 We can see this distant stellar city also known to astronomers as M31 on any clear, dark night with nothing more than our eyes.

A long time ago in a galaxy far, far away, a beam of light began its journey across the cosmos.

At the remarkable speed of 186,282 miles per second, this beam could orbit our planet nearly 449 times in just one minute. But it wasn't orbiting our world; it was coming from another galaxy.

Its journey began some 2.54 million years ago, long before the ice ages carved the land on which we live, and long before the first humans walked the face of our planet.

For more than 2,500 millennia, this stream of photons raced across the intergalactic void. As Homo erectus was emerging on the plains of Africa and Asia, the beam entered the space we now know as the Milky Way. By the end of Earth's last ice age 10,000 years ago, it was crossing the paths of the nearest globular star clusters. And, in 1822, around the time that Missouri became the 24th state of the U.S., the beam whipped past the bright star Mirach.

And then, on one cool autumn evening in 2022, this travel-weary light beam encounters a tiny blue world in orbit around a relatively nondescript G2V star near the edge of its own galaxy. In only three ten-thousandths of a second, it zips through this planet's atmosphere and enters the upturned eye of a curious stargazer: the first object it encounters on its 2.54 million-year journey.

It is here that its amazing voyage comes to an end – in the eye and mind of a terrestrial stargazer 14.9 million trillion miles from its home: the great Andromeda Galaxy.

It is, indeed, remarkable that we can see this distant stellar city also known to astronomers as M31 on any clear, dark night with nothing more than our eyes.

To spot it this week, head far from city lights into the wilderness, and cast your gaze midway up into the northeastern sky.

There you'll find the four stars of the Great Square of Pegasus. If you follow a line from the square's southwesternmost corner to its northeasternmost corner and continue along that path, you'll soon encounter a faint elongated smudge that is M31.

You can also use the uppermost three stars of the "W" of Cassiopeia to point toward it. M31 lies at the intersection of those two arrows.

Originally believed to be one of the nearest clouds of gas and dust in our own Milky Way galaxy, it wasn't until the early decades of the 20th century that astronomers discovered that it was a galaxy unto itself, an island universe they called it, and the farthest object visible to the unaided eye.

With binoculars, you'll be amazed at the immensity of M31. Even from its great distance this pinwheel of hundreds of billions of suns – a galaxy half-again as large as our own Milky Way – spans an area of sky 12 times larger than the full moon and is breathtaking.

As you gaze at its faint glow, ponder the journey made by the photons of light that stimulate your visual cortex at that very moment. And if you don't shiver with amazement... well, you may just not be human!