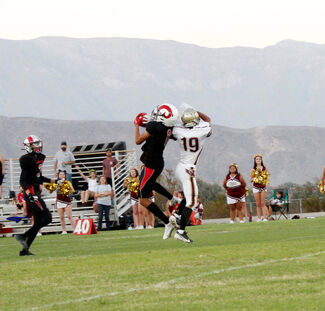 Junior Pedro Rodriguez gets up high for the interception in the first quarter.

Borrego Springs High School football has kicked off for another season. Being back in action under those bright gleaming Friday night lights (with the exception of two) and the sideline filled with exhilarated fans, it is go time.

The Rams remain in the Citrus League once again, facing off against familiar faces – Warner Springs, Julian, West Shores and San Pasqual Academy.

Last season, the Rams finished the season 1 – 7 overall and 1 – 4 in the Citrus League, coming in fifth, with their only win coming against Julian.

There is hope to return to the CIF San Diego Section Division 8-man football championship, but first, games need to be won.

In the Rams first game of the season, the team traveled to face Horizon Prep, where it was almost a comeback win with one play away, but it was not enough to be executed.

Despite the 27 – 20 outcome, Head Coach Tim White said, "I'm so proud of our kids in the second half, we started wearing them down."

Adding, "Definitely a lot of good stuff to learn from, to build on, to grow on, and get better, and I'm excited leaving that game, even though it was a loss. The improvement we made in the second half and the adjustments we made surely paid off this week."

It was definitely a much better story than last year, where they were shut out at home, 40 – 0.

The team also traveled to San Pasqual Academy on Sept. 9.

Prior to that game, Coach White said, "San Pasqual is basically the same team they were last year, the team to beat in our league and we all know it. They returned everybody, an almost undefeated team. They won the championship and lost to San Diego Jewish Academy in the finals. The expectation is they're really good, well-coached and we're just going to try to be a little bit better."

The Rams were back in front of their home crowd on Sept. 2, ready to take on crosstown rivals, the Julian Eagles.

It seemed all gears were in full force for the Rams, who were strong on both ends of the ball, and it showed, as they shut the Eagles out, 51 – 0.

"One, obviously pretty happy about the win, how the kids played. First team built us a nice cushion in the first half to allow us to play our second team JV kids in the second half, the young kids shut them out in the second half and scored so I couldn't be happier with the result in terms of overall team play, and everybody contributing to a great win against our friendly rival from Julian," Coach White said.

Momentum started early for the Rams as minutes just after kickoff to the Eagles, the ball came right back after an interception by junior wide receiver and linebacker Pedro Rodriguez.

However, the Rams run game was contained by the Eagles' defense, forcing the team to punt.

With about four minutes to go in the first quarter, sophomore quarterback and defensive back Isaac Dorado quickly tossed to senior running back and linebacker Adan Valdez in the middle of a scuffle, who managed to break through tackles, running for the first down in Julian territory.

The Rams continued to chip away at yardage, hoping to get across the goal line.

A quarterback change was made to junior wide receiver and defensive back Wesley Sexton due to an injury to Isaac Dorado. Then with less than three minutes to go, a celebration was had as the Rams found the end zone. The extra-point was no good, but the Rams were on the board, 6 – 0.

The Rams defense continued to hold it down, preventing the Eagles from crossing into their territory.

Junior running back and linebacker Francisco Garcia broke through tackles, running for over 30 yards, scoring for a touchdown. Going for the two-point conversion, Sexton evaded the defender, avoiding the sack, finding freshman linebacker Christopher Alcaraz open in the end zone, 14 – 0, Rams up.

In the second quarter, the Rams picked up right where they left off.

After forcing Julian to punt, junior tight end, defensive lineman and long snapper Brody White blocked the kick, bringing it back for a touchdown. Going for the two-point conversion again, Sexton took it in himself, extending the score to 22 – 0.

However, Julian's offense looked to be coming alive with a quarterback keeper for a really long run, breaking containment, and heading into Rams' territory. Despite the Eagles attempting to chip away at yardage, the Rams' defense was just too much.

With 4:35 on the clock, Valdez had a long run, pushing through for over 60 yards for the touchdown. Another two-point conversion, a pass to Brody White, pushed the Rams lead, 30– 0.

With less than 23 seconds left, as the Eagles chipped away, hoping to get a score on the board before the end of the half, a tip drill recovered by Alcaraz, Rams ball.

The clock winding down, nine seconds left, Brody White snuck in for the touchdown down the middle, and the two-point conversion once again was good, 38 – 0.

All cylinders were working in favor of the Rams in the first half, as they hoped to keep that going in the second.

The Rams received the second half kickoff, and Isaac Dorado was back in as quarterback to begin the third quarter.

After a solid floater to Brody White for the first down, the Rams were in Eagles territory at the 38-yard line.

Sexton was back at quarterback and had quick tosses, getting to the end zone.

Evading tackles left-and-right, sophomore running back and linebacker Jacob Dorado managed to have himself a big run for the first down.

However, the Rams could not do much after losing the ball in the following possessions on a fumble. But did manage to get a fumble of their own after Sexton forced the fumble, recovered by Jacob Dorado.

There was nothing for both teams, as they headed into the fourth quarter with the Rams up 38 – 0.

In the fourth quarter, Jacob Dorado started it off on a hot one with a 62-yard run for a touchdown. The extra-point was good, 45 – 0.

Both teams battled it out on the field, and the Rams put up one more on the board, 51 – 0.

Despite fighting and doing their best to get into the game, Julian could not get past the Rams offense and were contained by the defense. With a young team on both sides of the ball, it was a hard fought battle for these friendly rivals.

The Rams lost a handful of seniors who contributed key roles, and with a small school like this, Coach White said losing just one is tough to replace.

"Quarterback goes down, we just have a next man up mentality. We really train hard throughout the week to prepare not only the starters but the back ups to be ready to assume the role should their number be called up," Coach White said.

"Proud of Wesley (Sexton) yet again jumping in that quarterback spot like he did last week. Isaac (Dorado) is tough and doesn't want to come out of the game, but he got hurt last week too, and Wesley came in the second half and did a great job leading us to an almost comeback win, so I felt confident in him going back out there and doing it again.

The Rams are back on their home field against Warner Springs Sept. 16, with kickoff at 7 p.m.