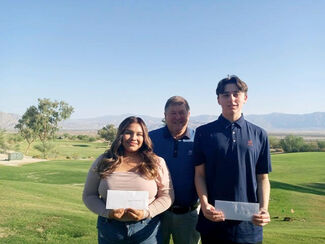 Natalia Carmona Rojos and Blaine Shugart, recipients of a $1,000 Rams Hill Scholarship, stand to the left and right of Harry Turner, COO and GM of Rams Hill.

Enrolled in the Colorado Hall of Fame, Considine is recognized for philanthropy and his business achievements. He also served two terms as a Colorado Senator.

"I've never worked for someone as giving and sharing. Terry is a great boss, and he really enjoys taking care of our employee family," Turner stated. "The scholarships are just one of the ways Rams Hill gives back to the community."

Considine purchased Rams Hill in 2013, and is responsible for restoring the championship golf course and earning a seat in the Top 100 Golf Courses in America.

The scholarship grants of $1,000 per school year are made to Borrego High School students and alumni, and can actually be turned into four-year grants by students that meet performance criteria.

This year's winners are:

- Blaine Shugart, who will be attending Fullerton Junior College, and plans to transfer to the University of California at Irvine

- Louis Enrique Hernandez, a third generation Rams Hill employee, will be going to College of the Desert, with the goal to become a golf course superintendent

Applications were strenuous and required official transcripts, essays, letter of recommendation, a copy of college acceptance as well as a statement by the student of all community and civic activities in which s/he is involved.

This is certainly not the first time that Rams Hill has been supporting our families and students. It was discovered that Rams Hill kept many employees on payroll during the summer months in order to ensure them a paycheck when normally folks would be let go until the next season, as written in an article published last year, written by BSUSD School-Community Liaison Martha Deichler. This gesture of kindness and generosity also extended to the community when Harry Turner invited these summer workers to donate their time to other activities in the community such as painting at the school district. For this, the Borrego Springs Unified School District is most grateful.

Rams Hill also offers assistance to employees with a short-term need through a giving program called, "Rams Hill Hugs." According to Turner, these are not great sums of money. "But Rams Hill Hugs make a difference in an unexpected financial emergency."

Finally, a third philanthropic fund, "For the Love of Borrego," provides grants to community organizations, funded by a 10% cut of Rams Hill's rental service. Last year, Rams Hill donated $11,000 to the Borrego Ministers Association. This year, the golf resort has raised $15,000, intended to be shared by three different causes. One contribution, a $5,000 given to the "Stop SVPs Fund," has already been donated.