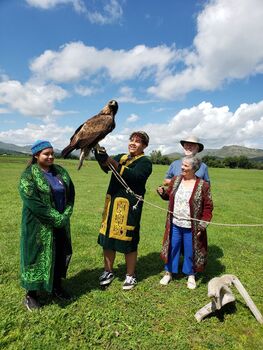 This is part two of the Mongolia series. Martha Deichler described the last portion of our journey to Mongolia in the prior edition of the Borrego Sun. Because Martha missed the early part of the trip due to Covid, I am sharing impressions about that segment:

- Mongolia is a long way from Borrego Springs. Ten time zones away. The other side of the world.

- Mongolia is relatively empty. It has the fewest people per square mile of any country on earth.

- Mongolians eat meat. A lot of meat. There are more than 90 million livestock in a country with fewer than four million people. Great herds of sheep, goats, camels, horses, cattle, yaks roam freely. Mongolians eat the meat, drink the milk, and process the hides.

Our delegation from Borrego Springs left LAX on July 30, headed for Ulaanbaatar, capital of Mongolia. We were four: Natalia Carmona and David Hernandez, recent graduates from Borrego Springs high school, along with Anne and Jim Wermers, honorary mayors of Borrego. Martha Deichler, down with Covid, would join us later for the Khovd portion of our journey.

The early part of our trip was an introduction to the country. Half of the population of Mongolia lives in Ulaanbaatar. The city is a forest of 25 story buildings. Construction cranes are everywhere. Glass and steel high rises. Digital billboards. International restaurants. Shopping malls. Traffic. Lots of traffic.

We visited museums, attended musical performances, and went shopping. David and Natalia got their hair done, Mongolian style. We were introduced to local cuisine. David showed us how to change our SIM cards for inexpensive Mongolian ones, with 10 gigabytes of data. Unfortunately, I learned later that since I had replaced my Verizon SIM card, any phone messages or texts sent to my Verizon phone number during those weeks were lost forever. If I didn't return your call, you now know why.

After two days, we headed into the countryside. We left early in the morning on a slow train bound for Darkhan, located in the north, almost to Russia. This part of Mongolia is green. Full of hills, trees, lazy rivers, animals grazing, scattered gers. Darkhan is a relatively new city, founded in 1961. It now has a population of 85,000, the third largest city in Mongolia. The size of the city made it much easier for us to get our arms and minds around what was going on. City and state officials welcomed us. We met with the governor, city staff, the Chamber of Commerce, and local businesses. The people were all down to earth. They wanted to know about us and our country, and they wanted to improve the lives of their people.

In Darkhan, Anne was able to meet up with members of the local Soroptimist International chapter. These professional women are helping needy folks by providing them with family gers (those round tents which are traditional housing) and have established community gardens for food and income.

A note about our guides: These folks are great. Enthusiastic, knowledgeable, fun. Speak great English. Would answer any question, on any topic, without hesitation. (We tested them a lot). They took us everywhere. And they love to party. These guides are the same extended family that helped Martha's group when they visited Mongolia in 2018.

After our city tour, we headed further north, into the sea of grass. Hours of driving on dirt roads, dirt ruts, and cross country. People are few and far between. Our destination was a visit to a nomadic family, several generations living in gers, along with their herds of sheep, goats and horses.

Mongolians are generous and welcoming to strangers. We were offered bowls of mare's milk tea in every ger we visited, along with fermented mare's milk and traditional snacks of curds, fried dough and thick butter.

In the countryside, it seemed like we ate mutton for breakfast, lunch and dinner. Freshly cooked meat is served on the bones, along with the fat. You eat with your hands. Just reach into the great dish of food in the center of the table and put your food onto a small plate. You rip your meat off the bones with your teeth, or with your handy knife. Then you break the bone to extract the marrow. (My digestive system struggled).

Half of the population is nomadic. In summer they graze their herds on grasslands down by the river. In the fall they move up to the hills, sheltering from the north wind behind mountains. Winters can be brutally cold, reaching to 40 below. This has been their way of life for centuries. Except now they have Solar panels, satellite dishes, motorcycles and send their children to universities abroad.

After a long drive back to Darkhan, we took a slow overnight train trip back to Ulaanbaatar to meet up with Martha and continue our trip to our Partner City, Khovd.