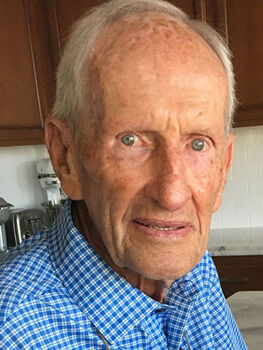 Hank was 93 when he passed peacefully next to his wife, Judy and his son, Stephen.

Hank was born in Madison, Wisconsin. He lived a very full and meaningful life, with 100% dedication. He was a man of values and respected those who lived their lives with the same dignity and truth.

After graduating from high school, he went on to graduate from the University of Wisconsin. Hank served in the United States Marine Corps during the Korean War as a fighter pilot. His military history was a very important and a proud part of his life.

Hank married his first wife, Rita, they had two sons, Stephen and Kurt.

In 1981 Hank met Judy, after 5 years of dating, they finally tied the knot in 1986. Hank swore to his buddies he would never marry again, until Judy came along, they spent 40 years of happiness and adventure together. Living in between homes in San Diego, California, Park City, Utah, Borrego Springs, California, Telluride, Colorado, and the recent years living in their home in La Quinta, California.

Hank had many interests and loved being out in nature. At a young age he competed in sailboat racing which began a successful and adventurous sailing pastime. He participated in many ocean races and assisted friends sailing around the world.

Hank also had a love for snow skiing. Telluride was a special place for him, he was known amongst the ski patrol as being the first person on the lift every morning and always right on time. Heli-skiing was one of his favorite memories. Most recently he could be found on the Trilogy Golf Course playing 18 holes three to four days a week.

To honor Hank's memory, we will be having a Celebration of Life:

In lieu of flowers, donations may be sent to Wounded Warrior Project: https://www.woundedwarriorproject.org