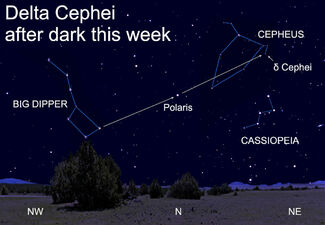 Astronomers have found an entire class of stars that serves as an accurate cosmic yardstick. The first of these stars to be discovered is known as Delta Cephei, and we can find it with the unaided eye in the constellation Cepheus, the king, high in the northeastern sky after dark

One of the most common questions I hear regards how we determine distances to the stars – a question not so easily answered by waving my arms around in the dark. Many folks think that if a star appears fainter, it must be farther from us. And that would be true if all stars were alike.

But all stars are not alike. Every star pumps out different amounts of radiation, and we can't assume that a star is farther just because it appears fainter.

Interestingly, the opposite is often true – that the brightest-appearing stars are farthest away. This occurs because stars radiating the least can be seen only if they're relatively nearby; those that are most luminous are much less common, but we can see them at greater distances. So, it's not just a matter of judging star distances based only on their brightnesses.

One basic way we measure stellar distances directly is by triangulation, a technique we all learned in elementary school.

Hold your thumb out at arm's length and alternately blink your eyes. Your thumb will appear to shift its position relative to background objects; move your thumb closer to your eyes and the shift you see will become larger. Your brain knows how far apart your eyes are and from the thumb's shifting position, it can estimate pretty accurately how far away it must be.

We can do the same with a star – not by blinking our eyes, of course, but by measuring its exact position at six-month intervals, when the Earth lies on opposite sides of its 186-million-mile diameter orbit around the sun, say once in summer and again in winter. If the star appears to shift its position between these two times, we can measure this and calculate the star's distance.

Unfortunately, this works for only the nearest 1% of stars in our galaxy. For more distant stars, astronomers must be even more clever.

And, indeed, they are. They've found an entire class of stars that serves as an accurate cosmic yardstick. The first of these stars to be discovered is known as Delta Cephei, and we can find it with the unaided eye in the constellation Cepheus, the king, high in the northeastern sky after dark this week. This star oscillates in size and temperature, and this causes it to brighten and dim every 5.3 days.

It was in 1912 that Harvard College astronomer Henrietta Leavitt noticed that the average brightnesses of such "Cepheids" was related to their periods of pulsation. From this, astronomers soon developed a "period-luminosity" law, which states that the longer it takes a Cepheid to undergo one cycle, the more intrinsically luminous the star must be.

In this way, Cepheid variable stars have become one of astronomers' most valuable "cosmic yardsticks" to help us measure distances across the cosmos.

And the first one was discovered in your sky tonight. Go check it out!