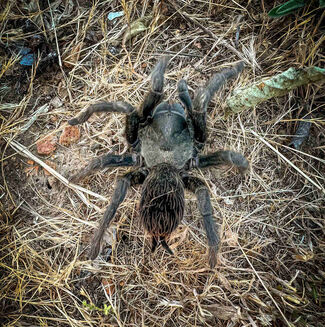 Halloween is approaching and for some reason, homeowners seem to delight in decorating with big, hairy spiders to frighten those of us trick-or-treating for candy or cocktails.

Depending on your love of big spiders, it can scare the cobwebs off you, or is no big deal.

As the desert begins to hint at fall, real tarantulas become more active as the larger males begin venturing out just before dark in search of a willing breeding partner.

It's important to note here, that despite their creepy appearance, tarantulas are gentle, slow moving and harmless neighbors in our natural world. In fact, they keep our insect population in check, feeding on various insects such as crickets, grasshoppers, beetles and other spiders. Tarantulas can live up to 10 years, and are often adopted as pets.

While they are carnivores, they cannot eat solid food. Instead, tarantula venom paralyzes prey, and the spider injects a digestive enzyme that liquefies the body that the spider can suck up through straw-like tubes.

Tarantula activity will peak in late September and early October as the males are driven by the mating urge. They will be most active just before dark as they cast about looking for a female tarantula that is typically lurking in a burrow.

This process can often be deadly sins female tarantulas will often kill the male after mating since he will provide a food source during her production of eggs.

According to the Steele/Burnand Anza-Borrego Desert Research Center, there are three species of tarantulas found within the state park, with the most common being the Aphonopelma eutylenum, better known as the California ebony tarantula.

Generally, tarantulas found here measure between three to five inches in size, but the largest species found in Venezuela can grow to 11 inches.

Tarantulas do not spin webs, but capture prey by pursuit.

Despite their bad reputation, remember they are harmless and protected within the state park. Enjoy them from a distance and move on so they can be part of keeping nature's balance.