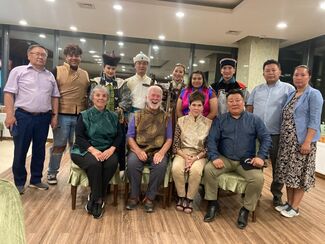 The enormous platter of fresh cooked mutton, beef, goat, horse and potatoes was ceremoniously placed on the table in front of us as a welcoming gift from the Mongolian-Kazak family. A cup of warm tea with fresh camel milk from their herd just outside the ger was set down in front of each of us. We all dug in with bare hands and shared a feast with folks 6,560 miles around the world. Hospitality Mongolian style.

In this rural farm outside the city of Khovd, Kazak camel-herder and farmer Bolat welcomed us through an interpreter and spoke about his life as a farmer and the challenges he faces. With his broad smile and weathered face, punctuated with intense Kazak-inherited blue eyes, he expressed dismay with the damage the Drought was causing on his farm. We could empathize with him and we realized how much we have in common.

Such was the kindness and generosity of the Mongolians we encountered on our two week trek to this immense and beautiful country of steppes dotted with the white gers of nomadic herders, enormous azure skies, 3.3 million people and literally millions more grazing animals.

The Borregans, Honorary Mayors Jim and Anne Wermers, Rotarian Martha Deichler and two Rotary High School Interact students, David Hernandez and Natalia Carmona, spent much of the time in awe of the scenery, animals and kindness shown towards us at every turn.

The route that took us to the town of Khovd in the western section of Mongolia, was an MOU signed more than three years ago in our Borrego Springs Library between the governor and a delegation from Khovd and our former Chamber of Commerce Executive Director Linda Haddock, former Honorary Mayor Andy Macuga and County Supervisor Jim Desmond. We became "Sister Towns" and we celebrated our commonalities: ethnically diverse and small towns, rural settings, beautiful scenery and a desire to collaborate on everything from art to tourism to education. In addition, Anza-Borrego Desert State Park, through the efforts of Mark Jorgensen, has had a sister park with Ikh Nart Reserve in Mongolia for years so this seemed like a natural progression.

COVID prevented a follow-up trip to Khovd until this summer. Armed with an updated MOU from our Chamber of Commerce Executive Director Françoise Rhodes and signed by County Supervisor Jim Desmond, Honorary Mayors Jim and Anne Wermers proudly presented the MOU to Governor Batsuuri and declared August 12, 2022 to be "Borrego Springs, San Diego, California and Khovd, Mongolia Sister Towns Day".

What followed was a celebration Mongolian style with meat of every sort, melons, vodka, gift exchanges and incredible entertainment. A professional Khovd performing group danced, played the traditional horsehead fiddle and performed throat singing, a style of singing that originated in Khovd. The female throat singer left the following day for a huge competition in Russia for throat singers - she being one of the few female singers of this genre. Honorary Mayors Jim and Anne were quick to extend an invitation to this talented group for a visit to Borrego Springs and beyond for performances. Be on the lookout this season for the Mongolians in our Performing Arts Center!

Our next stop was a public school, appropriately called Progress School, grades K- 12, who received us with another spread of delicious food, drink and performances by a student dancer and a teacher throat singer. Interact students David Hernandez and Natalia Carmona were mesmerized as were we all with the gracious reception.

Progress School was chosen by the Khovd Minister of Education as a partner school for Borrego Springs Unified School District. While there we planned teacher and student exchanges in order to learn more from each other, both educationally and culturally. We were intrigued to learn that many children live hundreds of miles from the school in Khovd and therefore must live in dorms in order to attend mandatory school. David and Natalia entertained the Mongolian teachers and students by speaking Spanish, a language rarely taught nor heard in Mongolia.

As a gift, the two students from Borrego Springs High School delivered a large suitcase of Physical Education equipment such as softballs, soccer balls, frisbees, large four-square balls, footballs and more. PE equipment is difficult to find in the rural town of Khovd and these items proved to be very popular. Funds for these materials were raised by the High School Interact Club over the last few years.

On a side note, David and Natalia were chosen to participate in this incredible journey due to their faithful service in the high school Interact Club over the last three years. David has served as President and Natalia as VP and both have volunteered hundreds of hours of community service with David hitting the all-time high of 130 hours, the most in the history of BS High School. David will be attending UCSB and Natalia UCSD this fall. We hope they carry the Rotary motto of "Service above self" into their new chapter in life.

Mongolia is an immense country and our adventures were just as immense! It is not possible to cover all of our stories in one article so stay tuned for a follow-up by Jim and Anne Wermers, your incredibly adventuresome Honorary Mayors!