The Diary of J. Smeaton Chase 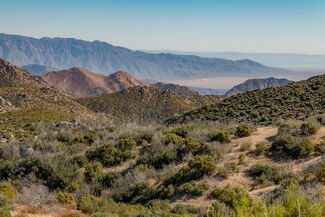 Looking down into Borrego Valley from the upper elevations of the San Ysidro Mountains, the terrain has changed little since J. Smeaton Chase hiked with his horse through this area during his 1916 summer travels from historic Borego (historic spelling) to Warner Springs.

The few of us who spend time in the remote parts of the Colorado Desert this time of the year are normally in the air-conditioned comfort of an off-road vehicle.

But that's about all that has changed since desert explorer and writer J. Smeaton Chase wrote of similar travels in the summer of 1916.

His book, "California Desert Trails," is an eloquent account of his journey with his horse, Kaweah, that began in Palm Springs.

Chase was fascinated by "God's Desert, not man's," and he set out on a journey of discovery that took him south to Salton Sea, then west to the old settlement known then as Borego. From there he continued up Coyote Canyon and over the San Ysidro Mountains via an old, unmarked trail that went up Thousand Palm Canyon and eventually to Warner Springs.

One of the great benefits of the expansive Anza-Borrego Desert State Park is preservation of this wild place, allowing today's explorers to follow some of the same trails used by pioneer travelers such as Chase.

A few years ago, I did just that. There was no marked trail to follow, but from the landmarks mentioned by Chase, our group successfully made a journey that was at least similar.

It was a magnificent wilderness trek over three days and included a driving rainstorm, discovery of untouched Native American artifacts and a disconnect from today's world.

Remember, Chase made his trip over a century ago and Borego, while an important water source, was then just an outpost for early cattlemen, prospectors, government survey parties, and the hordes of those seeking the lost Peg-Leg Gold rumored to have been found in nearby badlands. His book talks about those many characters.

In the summer heat, Chase had arrived at the Borego settlement after crossing the searing Borrego Badlands and camping one night at 17 Palms Oasis.

Chase spent an extra day at Borego because of the abundant grass and mesquite beans for his horse, and available water. He would begin his trip to Warner Springs early the next day.

"I turned in betimes (early) and coyotes obliged with a lullaby," Chase wrote. "I awoke early to see the red pennon (flag) of dawn flying on the horizon."

He began his trip northwest, encountering a remote homestead composed of a "one-room tent house of fair size," and small garden where he met a "cheery little Devonshire woman who bade me 'be seated and do rest ye, now.'"

The lady offered food and water and she asked hopefully if he may have brought mail from the post office in Warner Springs, a common custom employed by the postmaster who would ask travelers to carry mail if going in the right direction.

He bought a fresh baked loaf of bread, some sugar and some barley for his horse before continuing, carrying two letters from the homesteader to be mailed in Warner Springs.

In the summer heat he was happy to find a trickle of water in Coyote Creek where he would spend the night, and the next day entered Collins Valley where he spotted an old one-room cabin where he met a colorful and eccentric prospector who had been "grubstaked by a friend in Los Angeles." He identified him as Thomas McSandy.

Chase spent the night and wrote about the non-stop stories provided by his host who seemed obsessed with "rattlers, hoop snakes, 20-foot red-racers and the deadly bites or stings of tarantulas, scorpions and centipedes."

Chase had originally planned to follow the historic Anza route up Coyote Canyon, but at the suggestion of McSandy, decided to join him "on a much shorter trail, passing the Indian villages of San Ygnacio and San Ysidro, places I had long wished to visit."

The trail was far too steep and rough for riding, so he led his horse as they climbed.

"Though this trail is little known and not given on any map, it is plain, from the depth to which it is worn, that it has long been used by the Indians in passing between their desert and mountain villages," Chase wrote.

When we made the journey, the trail was no longer an active travel route, so we had a more challenging task of finding the path in the untouched wilderness.

Vegetation changed, along with temperatures, as they climbed. Sycamore, Cottonwoods, willows and alders replaced palms and agave.

Chase goes on to share his meeting with the Indians living at San Ysidro and San Ignacio and eventually arriving at Warner Springs where he reveled in the shade of yawning oaks and catching up with news that he had not heard for weeks.

"California Desert Trails" continues Chase's account of his journey back into the desert to Agua Caliente and on to Yuma and Blythe.

But his travel journal through Anza-Borrego is a fascinating look at local history that can be duplicated today, thanks to the foresight of creating Anza-Borrego Desert State Park.