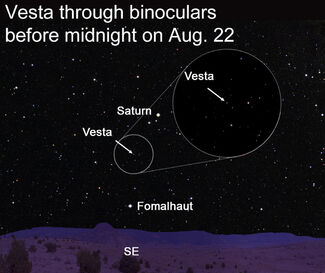 Vesta holds the distinction of being the brightest of all asteroids, occasionally appearing to binoculars or even the unaided eye from a dark rural site.

I remember well those wonderful days of elementary school when the very mention of the "Solar system" conjured up in my mind amazing images of the sun, the planets and their attendant moons, and even mysterious comets sweeping by now and then. And I suspect many other people had the same experience.

But what about the asteroids?

Poor lil' asteroids seldom get much attention. Too bad, too. There may be more asteroids than anything else orbiting our sun. Most tend to lie in a region known as the asteroid belt in the void between the orbits of Mars and Jupiter, and range in size from tiny pebbles to chunks of rock as large as mountains.

It was in July of 2011 that one of these asteroids – Vesta – was first visited and orbited by a robotic spacecraft named Dawn. After analyzing and photographing it for a year, Dawn departed Vesta and set off for its March 2015 destination of Ceres, now designated as a "dwarf planet".

Since astronomers discovered Vesta 215 years ago, astronomers have learned that the 329-mile-diameter chunk of rock reflects about 43% of all sunlight falling onto its surface – the moon, by comparison, reflects only 12% – and this makes the asteroid particularly "shiny." As a result, Vesta holds the distinction of being the brightest of all asteroids, occasionally appearing to binoculars or even the unaided eye from a dark rural site. And right now is one of those times – a time we know as Vesta's "opposition."

Opposition, as regular readers of this column might recall, is a time when a Solar system body appears opposite in the sky from the sun. It's during this time that it also lies closest to Earth and reaches its brightest. Vesta achieves its opposition point this year on Aug. 22 when it lies at a distance of "only" 119.5 million miles from Earth, and that makes it perfectly placed for observation for the next couple of weeks.

To find Vesta, you will need several things. You will need binoculars. You will need a dark, rural sky and pretty good eyesight. And you'll need to be quite dedicated because finding it could require a search.

There, about one-third of the way between the planet Saturn and the bright star Fomalhaut you'll see a region of relatively faint stars. It's within this area that you'll find Vesta. The accompanying star map will help you locate where to aim binoculars so you can track down this elusive body.

Keep in mind that Vesta is extremely faint and will appear much like every other faint star in your field of view, but this week it is barely visible to the naked eye if you've got a very clear, dark sky and excellent vision. You may find that Vesta appears a bit brighter around midnight when it lies higher in the southern sky.

If you think you've found it, make a sketch of the stars in its vicinity, and return to it night after night. After a few sessions, you should notice that one of these "stars" seems to be drifting through the stellar pattern. This is the asteroid Vesta!