Well, That's a Star of a Different Color! 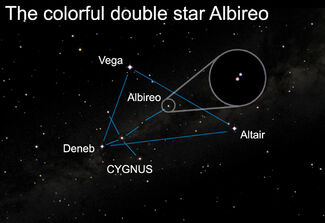 Albireo's stars not only represent stunning colors but a fundamental property of stars as well: their temperatures. One of its components is a yellow giant star – about 7,500 degrees F – and the other a bluish star about 23,000 F.

I've been gazing skyward now for nearly six decades, and I'm still amazed at all we can see if we just take the time to look up into a dark sky. Add to that a small backyard telescope and the celestial sights become even more remarkable.

Take star colors, for example. Most folks aren't even aware that stars display a variety of hues. Those appearing white are hotter than those that are orange or red, and bluish stars are the hottest of all.

Now it's true that these colors are often quite subtle and seeing them can be challenging since our eye's color receptors don't respond well to faint light. You know this is true if you've ever looked around outdoors after dark; shades of gray appear everywhere but colors are virtually nonexistent.

The same is true with stars. Anyone with the slightest colorblindness might miss their colors completely. But there is a place in the heavens where two dramatically tinted stars appear side-by-side and, when viewed through a small telescope, always elicit "oohs" and "aahs." Astronomers know this "double star" as Beta Cygni, but most of us just call it Albireo.

Look for Albireo near the center of the Summer Triangle – formed by the three bright stars Deneb, Vega and Altair – midway up in the eastern sky just after dark this week. It marks the head of Cygnus, the swan, which stargazers can also recognize as the Northern Cross.

With our unaided eyes, we see Albireo as a single star, no matter how good our vision, but aim a small telescope in its direction you'll discover it's actually two separate stars. In 1905, the astronomy writer Agnes Clerke wrote that the tints "golden and azure" gave perhaps "the most lovely effect of color in the heavens." Anyone peering at Albireo for the first time will surely agree.

While viewing this beautiful stellar pair, it's fun to contemplate what we're seeing. Albireo's stars not only represent stunning colors but a fundamental property of stars as well: their temperatures. One of its components is a yellow giant star (about 7,500 degrees F) and the other a bluish star (23,000 F).

The stars of Albireo lie between 400 and 430 light years from us. They may orbit a common center of gravity, but don't expect to see them move while you're watching: One orbital cycle could take 100,000 years to complete. And if we could transport our planetary family out to this distant pair, we would find that at least 51 Solar systems could be lined up edge-to-edge between the two stars.

As is often the case in astronomy, the name Albireo has its roots in misunderstandings and mistranslations. Arabic texts originally called it "al-Minhar al-Dajajah" – meaning "the hen's beak" – certainly understandable from the location of the star within the celestial bird's body. But Latin scholars misunderstood that the name had come from a kind of herb and translated it as "ab ireo" (meaning "from ireus"). Eventually, people considered this a misprint and transcribed it as "al-bireo".