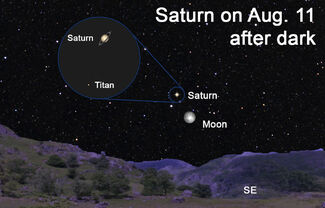 Saturn reaches its "opposition" point in mid-August (officially on Aug. 14) when it appears as a bright "star" in our sky opposite the sun, rising in the southeast at sunset and glistening all night.

It's often been said that beauty lies in the eye of the beholder, so if I were to ask which is the most beautiful of all the planets, I would expect a variety of answers.

Some might say it's the delicate white crescent of Venus; others would prefer the undulating cloud bands and dancing moons of Jupiter. Still others may choose the ominously red planet Mars. One can certainly make a good case for each, as well as for our own blue and white Earth.

But if you're like most stargazers, you'd probably answer: "the ringed planet Saturn." And with that I must agree. So, for all you Saturn lovers out there, this month's for you!

Saturn reached its "opposition" point in mid-August (officially on Aug. 14) when it appeared as a bright "star" in our sky opposite the sun, rising in the southeast at sunset and glistening all night.

You should have had little trouble spotting this distant world since it's easily the brightest object in that part of the sky. It was even easier to find on the night of Aug. 11, as it appeared next to the full moon.

Not only did Saturn's opposition mean that it lied opposite the sun in our sky, but it also meant it's closest to the Earth. That week, Saturn approached within only 823.3 million miles of our planet and produced a marvelous view through a small telescope.

If you've never viewed this planet for yourself, you have no idea what you're missing. Everyone's first glimpse through a telescope elicits a gasp of wonder (and accusations of it being a projected slide!), as the remarkably three-dimensional ring world appears suspended against the darkness of space.

Even a small instrument with a magnifying power of only 30x or so will show its rings as well as Saturn's largest and brightest moon Titan. Of course, viewing through a larger telescope with a higher magnification under good skies will show not only the planet's rings but also a break within them known as the Cassini Division.

Making the sight even more meaningful is an appreciation of what we're seeing. Saturn is a world made almost entirely of gases, with a diameter about 9.5 times greater than the Earth's. Its rings, if brought here, would fill much of the space between our planet and the moon.

Though the rings appear solid to the eye, we know today that they are composed of billions of individual ice chunks – some as tiny as dust grains, some as massive as mountains – all whirling about the planet at tens of thousands of miles per hour.

Saturn will remain in our evening sky throughout the late summer and autumn, but during the next month or so expect it to offer a truly spectacular sight through a small telescope. If you don't have one of your own, call your local planetarium or amateur astronomy club to see when their next public "star party" will be so you don't miss this remarkable sight.

One glimpse at the stunning ringed world and I'm sure you'll agree: Saturn is indeed the most beautiful planet in our Solar system!