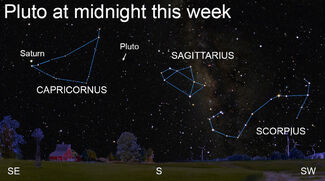 Even the largest of telescopes show Pluto as only a tiny pinpoint of light indistinguishable from the thousands of stars behind it.

Anyone who's ever studied the Solar system in school has learned this mnemonic device in which each word begins with the same letter as the planets of our Solar system in order of their distance from the sun.

Pluto? Wait a minute! It's no longer a planet, is it?

Well, we've called it one ever since Clyde Tombaugh found it in 1930, but Pluto is a rather strange object. It's a world not even 1,500 miles across; in other words, if we could bring it to Earth, it would fit inside of Mexico. Its orbit is tipped about 17 degrees to the orbits of all the other planets and is so elongated that every 240 years it actually comes closer to us than Neptune. In addition, Pluto is an icy world with only five known moons, yet it resides in the realm of the gassy, ringed giants, where dozens of moons exist.

When the New Horizons spacecraft visited Pluto in 2015 after its nine-year journey from Earth, many questions about this icy world were answered, but just as we expected, many more were raised. This is definitely one strange world!

Pluto just doesn't seem to fit the pattern of the major worlds of our system, and because of this, astronomers have reclassified it – along with four other bodies – as a "dwarf planet." While this has apparently irritated more than a few people, it's not an uncommon occurrence in science. For example, when people realized that whales showed the characteristics of mammals rather than of fish, they reclassified them as such. No one seems terribly upset about that!

Right now, Pluto lies at its opposition point, and about as close to the Earth as it ever gets – a "mere" 3.19 billion miles away. But before you get too excited about seeing it, keep in mind a few important facts.

First off, even the largest of telescopes show Pluto as only a tiny pinpoint of light indistinguishable from the thousands of stars behind it. To find it, you must have a very good knowledge of the sky, some excellent star charts, a dark, un-light-polluted sky, a pretty hefty telescope, and superb skills at navigating the starry heavens.

If you've got all those things – along with the patience of a saint – and would like to spend your nights seeking this tiny world, keep in mind that Pluto appears some 357,000 times fainter than the planet Saturn (now appearing midway up in the southeastern sky around midnight). It now lies between the constellation of Capricornus and the teapot of Sagittarius (where the thickest part of the Milky Way appears).

You can find detailed finder charts from an online search of "Pluto finder chart 2022". With Pluto in the sky from dusk until dawn, you'll have plenty of time to carry out your quest. And believe me, you'll need it!

Whatever Pluto is – planet, dwarf planet, or something else – we should probably learn a new mnemonic device for our Solar system's planets. How about: "My very energetic mother just served us nachos."