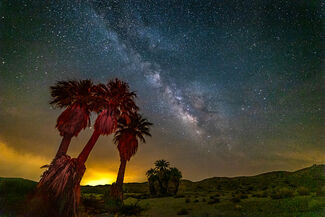 Night image of 17 palms with the Milky Way overhead. Reddish glow are the lights from El Centro.

A bead of sweat ran down my chest as my thoughts drifted to another traveler who camped in this same spot over a century ago.

It was 109 degrees at 10 p.m. as I sat in quiet solitude amidst the cluster of silhouetted palms while the Milky Way marched slowly across the summer sky.

I had come to 17 Palms Oasis in the comfort of an air-conditioned truck, but I was thinking about J. Smeaton Chase, an eloquent writer who recorded his travel by horseback to this spot in July 1916.

Chase spent months on foot or horseback exploring the deserts of Southern California and writing about his adventure in "California Desert Trails: Riding through the Mojave Desert in 1916."

While still remote in the barren wasteland of Borrego Badlands, today's travelers can easily reach the oasis in a short time.

For Chase, an Englishman who fell in love with the desert, the oasis was an unmarked outpost off the path he was following from Salton Sea to Borego Valley, as it was known then.

This was just one leg of his journey that began near present day Palm Springs and meandered south past Salton Sea, west into Borrego, then up Coyote Canyon to an old Indian trail over the San Ysidro Mountains to Warner Springs.

The final chapter of his book records his continued travel back into the desert to Agua Caliente, Yuma and Blythe.

My thoughts focused on Chase's chapter about his ride from Salton Sea to 17 Palms in 120-degree heat.

He talks about likely saving the lives of two young runaways from Indio, ages 10 and 12, that he encountered before setting off through the badlands. They had little water and would have no doubt perished in the unforgiving summer heat had he not warned them of the dangers and sent them home.

His writings are a connection because much of what he describes has not changed, preserved thankfully by the protective embrace of Anza-Borrego Desert State Park.

He beautifully describes the sunrise as he began his journey from the Salton Sea into the Badlands. Speaking of the sun, he wrote, "This time his chin was pillowed on the Cottonwood Mountains, and his first shot at me came in a blaze of red across the dreary waters of the Salton."

His desert journey that summer day would cover 25 miles and noted, "The going became worse, loose sand and gravel hour after hour. The travel was slow and tiresome."

There were no roads, signs or even significant tracks to let him know he was moving in the right direction, but eventually he reached the relative comfort of the shady palm grove.

Chase knew that the meager water at 17 Palms was not drinkable. He described it as a "mere seepage, ill smelling and strongly alkaline."

Despite his hardships, Chase could see the beauty of this place and expressed them in ways that connect many modern desert travelers to the past.

"With my back to a palm I hugged the shade till the sun went down, then climbed to smoke a pipe on the hillside and view the surroundings. Without having been to Egypt or Arabia, I could easily imagine myself looking down on a wady of the Red Sea Region," he wrote.

As I sat in the heat of the summer night, I reflected on how much has changed and how much has not since Chase sat in this same place.

A stunning Milky Way hung overhead, and, like Chase, I was consumed with the beauty and solitude of the grand landscape.

There is no surface water now at the oasis, but the palms survive, so there must be some just below the surface.

If you do plan to visit, check out the Desert Mailbox wedged in the trunks of two palms at the north end of the grove.

While today this serves as a place for travelers to record their visit, legend says that early travelers would leave mail here to be forwarded by others heading in the right direction.

A few safety notes for those planning to visit 17 Palms.

- The oasis is in a little side canyon that hooks off Arroyo Salada, about 3.5 miles southeast of the Arroyo Salada Campground.

- Four-wheel drive is not required but recommended because of soft sand and the need for high clearance.

- If you plan a summer trip, go with another vehicle as there will not likely be others traveling out there this time of the year.

- Carry plenty of water and let someone know where you are going and plan to return and stick to the plan.

- Pack along a copy of California Desert Trails and enjoy the beauty while you read.