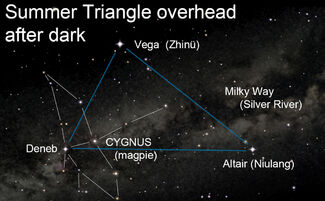 The brightest of this stellar trio – and highest in the sky – is Vega, the most prominent star in the tiny constellation of Lyra, the harp.

There's a wonderful ancient Chinese story that tells of two lovers – Niulang, a poor, orphaned cowherd and Zhinu, a young, beautiful weaving maiden and the seventh daughter of the Emperor of Heaven – who once were separated and banished to the skies. The young maiden settled at the star Vega and the cowherd at the star Altair, forever separated by the Silver River (the Milky Way).

When the magpies heard this sad tale, they decided to gather to form a bridge across the river, marked by what we know as the constellation of Cygnus, so the two lovers could reunite for one day each summer. That day – the seventh day of the seventh lunar month of the Chinese calendar – is celebrated as the Qixi Festival, also known as Chinese Valentine's Day, and this year it occurs on Thursday, Aug. 4.

The star Vega, also known to the Chinese as the Weaving Maid Star, shines brightly nearly overhead just after dark this week, while Altair, known as the Cowherd Star in China, lies below and to its south. Regular readers of this column may recognize these stars, along with Deneb, as those that form the famous Summer Triangle, visible in our skies every year at this time.

The brightest of this stellar trio – and highest in the sky – is Vega, the most prominent star in the tiny constellation of Lyra, the harp. This brilliant white star has a diameter and mass more than twice that of our sun and produces about 40 times more power than our star. As a result, astronomers believe that Vega will likely exhaust its fuel in only one-tenth the time, making its expected life span only about one billion years.

The southeasternmost of the three stars is Altair, the brightest in the constellation of Aquila, the eagle. Its name comes from the Arabic Al Nasr al Tair, meaning in English "the flying eagle." One of the nearest stars to us, Altair lies about 100 trillion miles (17 light years) from us. In other words, its light has been traveling through space for roughly 17 years, and the photons of light that strike our eyes tonight have been traveling in our direction since 2005.

Finally, farthest to the north lies Deneb, located in the tail of the great celestial swan Cygnus. Deneb lies some 15,000 trillion miles (about 2,600 light years) from us – so far that we see it as it appeared in the fifth century B.C. The light that leaves the star tonight won't arrive here until the 47th century.

Deneb is not only the brightest star in Cygnus, but also one of the most luminous in our entire galaxy. It shines with a luminosity equivalent to about 196,000 suns. Just imagine... this stellar powerhouse generates more light in just one day than our sun has since the days of Marco Polo at the end of the 13th century!

Of course, you can see the Summer Triangle on any night during the summer. I hope you'll head out on Aug. 4 to greet these stars and recall the romantic story of Niulang and Zhinu.

In the meantime, have a stellar Chinese Valentine's Day!