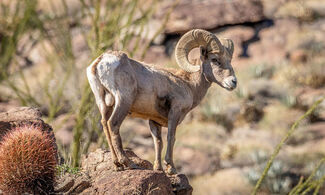 The delayed 50th anniversary Anza-Borrego Desert Bighorn Sheep Count was completed in early July and results of the tally have been released.

COVID and the tragic death last year of a count volunteer prior to the annual census resulted in the count being severely reduced in 2020 and canceled in 2021.

A slim total of only 59 sheep were logged by about 30 volunteers who spent three days enduring desert heat at 10 locations. Typically, nearly 90 volunteers scatter into the desert at more than 20 locations, some very remote, requiring a lengthy hike and time in the field. During the 2019 census, the last year of a full count, a total of 273 sheep were observed at 20 locations.

The thousands of hours devoted by volunteers during the 50 years of the count has provided important information to wildlife managers about herd conditions, range conditions, lamb production and potential sheep health problems.

Information collected is shared with the California Department of Fish and Wildlife.

The range of the desert bighorn sheep extends from Mexico to San Jacinto in Riverside County where population estimates range from about 900 to 1,000 animals.

There was an emphasis on safety this year, following a heat related death last year of a sheep counter prior to the annual census. While hiking to cache water before the count, he was overcome by extreme heat in Palm Canyon.

McCamish said plans are to begin in March next year for the 2023 count and he will be looking for additional volunteers interested in participating. For information on being a participant in 2023, contact McCamish at Danny.McCamish@parks.ca.gov.

Sheep count volunteers undergo training to be able to identify age and sex of bighorn sheep in addition to their health. Additionally, they are trained to deal with extreme heat and the dangers they may encounter in the wilderness. The annual event is supported by Anza-Borrego Foundation and private donors.

Some of the count locations are accessible by vehicle, while others require remote camping and long hikes to the census site. Additionally, many of the count sites can be reached by short hikes and participants return to local lodging at night.