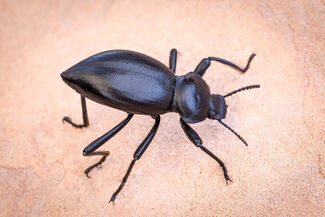 Ewww, I almost stepped on it.

It was almost dark, and the jet-black beetle was walking slowly along my path and was very hard to see.

Not only would he not survive being stepped on, but I would suffer from the potent smell this tiny beetle can produce.

Known as desert stink beetles, skunk or headstand beetles, these shiny black bugs pack a potent ability to discharge a foul-smelling, skunk-like secretion at their attackers.

Measuring about an inch in length, these insects are common residents throughout the western United States. The common desert dwellers around mesquite trees where it burrows in the sand during daytime summer heat and emerges to feed on plant material, fungi, and animal waste in cooler nighttime air.

Unlike some other beetles, this one is unable to fly, likely due to an adaptation where wings are fused shut to retain moisture.

But this beetle's real claim to fame is its ability to stink.

If approached by a predator, they will lift their rear end and squirt a stinky fluid that is an effective repellent.

Like most things in nature, nothing is perfect, and there are other critters who successfully feed on the stink beetle.

In addition to burrowing owls, loggerhead shrikes and skunks, there is a species of mouse that has learned how to deal with this little stinker. Their approach is to push the beetle's abdomen into the sand and bite its head off.

These are not aggressive insects, and they move rather slowly, so when you see one, just enjoy it from a distance.