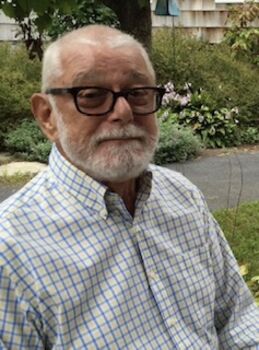 Peter Dudley, 83, and the love of my life, departed for a new adventure on May 12, surrounded by our three sons and a granddaughter. When his heart and kidneys began to fail, while in our California home, he desperately wanted to make it back to his beloved Cotuit where he was raised, and returned for retirement in 1999. Because of his pure will and determination, he made it home one week before his death.

Peter was above all else a wonderful husband, father, Gramper and Opa. Nothing made him happier than when he was surrounded by those he loved. His great sense of humor was one of his hallmark qualities which endeared him to many, and kept his family and friends laughing.

Peter's passions were biking, hiking, boating and fixing things. His idea of fun was to bike 50 miles and then go on a hike! Boundless energy defined his life thru his seventies when various ailments and age slowed him down......some.

As a NASA engineer, Peter's career took him all over the world working on all things related to space travel. He was proud to have been on the launch pad at Cape Canaveral when our first American astronaut, Alan Shepard, was launched into space, and again as John Glenn was the first astronaut sent into orbit. After retiring from NASA he enjoyed a second, less stressful, career with the Worcester Foundation for Experiential Biology.

He volunteered for ever so many things: Cooking and serving meals to the homeless; helping to clean up in New Orleans after Katrina; serving on various committees in churches on both coasts; and answering those calls whenever he was able, with energy and enthusiasm. Always willing to add a helping hand, he and his buddy Jim ran the Cotuit Federated Church's CraftFest kitchen for many years, serving up lobster rolls, clam chowder and various other creations.

His happy place in Cotuit was on the water in a boat, any boat, surrounded by family and friends. His happy place in Borrego Springs, CA was enjoying the sunshine, desert and a picnic at one of the many canyons close by our home with our Borrego friends.

Peter left behind his wife Marcia of almost 62 years; three kind, caring sons and their wives, Jeff and Susan of Florida, Jim and Pam of Texas, and John and Nancy of Maine along with nine awesome grandkids – Chris, Todd, Sarah, Connor, Ben, Elaine, Alex, Amanda and Freddy, and five wonderful great grands – Noah, Ryan, Troy, William and his namesake Peter!

A memorial celebration of Peter's life will be held on May 27 at 1 p.m. at the Cotuit Federated Church in Cotuit. Please wear casual attire, Peter would be unhappy if he looked down and saw anyone in, what he considered to be, an uncomfortable suit and tie!

A practical man, Peter felt celebration flowers were unnecessary. Take someone you love out to lunch instead, or donations may be made to the Cotuit Federated Church's Building Fund.