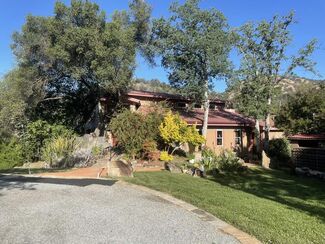 When you haven't seen an old friend in over 20 years, you wonder how they've changed. And how their environment has changed. Not a problem with Richard, he's still exactly the same as when I helped build some of his house in Three Rivers.

That is, after I humped river rocks, boulders some of them, to build a dam across the river the first time I visited.

Set on the banks of Kaweah River below Sequoia National Park, Richard turned his weekend vacation home into a retirement dream house. The old "Green House" is still there, now guest quarters for the likes of me and other friends, but he's built something special, unique in the annals of home building. Using his furtive imagination and building/mechanical skills to "blend in" with the riparian environment above the river, he built on and over rock/boulder formations, had a tree snaking up through the 2-story house and into the sky, and Hoover Dam has nothing on this guy, more concrete and steel rebar such that even a former general building contractor like me is duly impressed.

The imagination, design and sophistication of his efforts over the past 20 years can only be brought to life with a visit. Richard used so much concrete, rebar, and cinder block that WiFi is difficult to penetrate through his solid walls. It's nuke-proof.

The 1½ acres of land are beautifully landscaped, and Richard's wife, Carol, has a green thumb – and hands, forearms, and brain, too – for flowering plants.

The sound of the quietly rushing river below is present day and night, and it's soul-soothing. Today a river rafting group stopped at the swimming hole, and although the river is low for the season, they seemed to be enjoying themselves, smiling and waving to me.

Yesterday we moved a metal sculpture – the Flying Flamingo – to a better spot to catch the intricate movements of this unique piece of art-in-motion, the gentle breeze blowing up-canyon most of the day. It's a brilliant thing to behold when the hinged and feathered sheet-metal wings are gently flapping, and the body bobbing and flexing over its counterweights. Think Ricardo Braceda sculpture that looks like it's flying.

So now let's talk about fishing! Richard and his helpers found and placed/cemented every flat paver stone by hand on the winding pathway down to the river, as well as the granite benches lining the sides of the path. And for the past three mornings, I've risen before sun-up and made the trek.

At the river, it's time to get busy. I learned after my first venture at Lake Diaz to get the float (one of hundreds of Richard's wine corks), the hook, the sinker, and the trout bait all set and ready to go beforehand, because it seems to take me forever to get everything on the end of the line. I'm not a clumsy oaf, but rather the ultra-fine 5-lb test line requires fingers and thumbs nimbler than mine. But now I have a surgical hemostat to grab the ends and tie knots. The first time out on the patio, it took half an hour to get it all together; I'm now down to a mere 15-minute routine, with two more days left here before driving down to Ventura.

I'm not as nimble over the sloped granite boulders as I was 20 years ago, so to avoid stumbling or falling, I looked like a guy carefully navigating an active minefield. And I had my cell phone with me, too, waterproofed, but if I dropped it, that puppy would sink like a stone into the depths and swirling current, essentially rendered irretrievable.

When I say "fishing," that's really a misnomer. Because apparently there's a vast difference between fishing...and catching one. BTW, my casting is at least getting more accurate by the day, and I can now hit a spot 30-feet into the river within two feet.

I spotted an eddy, a reverse flow just this side of the main channel, and I let that cork bob and weave, the bait scent permeating the surrounding swirling gyre of river flow to attract the trout, and I could see the bait trailing behind by 8-inches.

After an hour of sitting patiently, dreaming up scenarios and stratagems for landing a rainbow trout, the sun came up ... and not so much as a discernable nibble. Hope is not a strategy!

I packed up and went back up to the house where Carol had a bacon and egg breakfast waiting. She's not cruel enough to have cooked up a store-bought trout...yet.