Summertime is on its way! 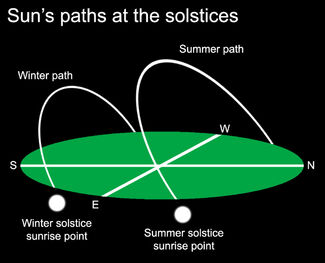 Many people believe we have seasons because we lie closest to the sun during summer and that this causes our hot temperatures.

Officially, the summer solstice arrives this year on June 21 at 2:14 a.m. PDT (5:14 a.m. EDT). This time marks the exact moment when the sun reaches its farthest northward point over the Earth and signals the onset of summertime in our planet's Northern Hemisphere.

On that day, early morning sky watchers will notice that the sun rises farthest to the northeast, arching to its highest point around noontime, and setting farthest to the northwest in the evening. From the other side of the equator – in the Southern Hemisphere – viewers now see the sun moving quite low across their daytime sky. For them, this date marks the beginning of winter.

It's surprising how many people don't understand why we have seasons at all. Many believe that it's because we lie closest to the sun during summer and that this causes our hot temperatures. Now, while it is true that our planet's distance from the sun changes during the year, this is not the cause of our seasonal temperature variations. In fact, we're actually about six million miles farther from the sun during July than during January!

No, our warming temperatures occur mostly from how long the sun appears in our daytime sky. And that comes about because our planet's axis is tipped 23.4 degrees to its orbit around the sun. This causes sunlight to fall more directly onto our hemisphere than the other at various times of the year. During the summertime, the sun appears higher in our sky. It rises in the northeast, swings very high overhead around midday, and sets in the northwest. In most places in the U.S., the sun remains in the sky for about 15 hours or so and lies below the horizon only about nine hours each night. This means that less of the heat gained during the daytime can escape into space after dark, and temperatures naturally rise over time.

In the winter, just the opposite occurs. Most places in middle latitudes see the sun only about nine hours a day at that time of year. In other words, our atmosphere loses heat during the long nights faster than it can gain it during the short days. A logical question might be this: why, then, doesn't the year's hottest day occur on the first day of summer, when the sun appears longest in our sky? That's because our atmosphere takes time to absorb the sun's heat. Put a pot of water on a hot stove, and you know intuitively that it doesn't boil instantly, and you make allowances for that when cooking.

The same is true with our atmosphere; it requires a couple of months to respond to the extra heat. As a result, the hottest times of the year in the Northern Hemisphere typically occur not around June 21, but in August or early September, while our coldest often come during January and February.

I've always loved the summertime, but the scorching hot temperatures in the Southern California desert keep me indoors during the daytime. I often just wait until dark to enjoy the cooler air and the beautiful stars of summer!