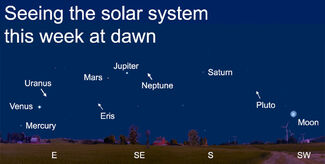 Before sunrise, you should be able to spot all the visible planets (Mercury, Venus, Mars, Jupiter and Saturn) in order of their distance from the sun. Quite a rarity indeed!

Many celestial phenomena excite stargazers, but few are as cool as the one you can see during the next two weeks. Your only challenge will be forcing yourself to head outdoors before sunrise!

If you do, and if you have a very low eastern horizon, you should be able to spot all the visible planets (Mercury, Venus, Mars, Jupiter and Saturn) in order of their distance from the sun. Quite a rarity indeed!

During morning twilight over the next two weeks cast your gaze very low in the eastern sky. There you'll find Mercury, one of the most elusive of all planets because it never rises very high before the sun's glare brightens the sky. To its upper right lies the brilliant planet Venus, rather hard to miss.

Some folks might be alarmed to see the planets "aligned" in such a way, but those who understand the workings of our cosmos know that the arc along which they appear is the geometric plane of our Solar system – the path along which most Solar system bodies travel.

This occurs because of the way our planetary family collapsed and flattened after the sun's birth some five billion years ago; as a result, nearly everything orbits our parent star along this plane.

From within, we see this plane as a wide arc extending across our sky; it represents the path along which the planets journey past the more distant stars. Astronomers call this the "ecliptic" and, while it's always in the sky, its location is only obvious when planets or the moon are present to trace it for us. If you check the sky on more than one morning, you'll find that the waning gibbous moon enters the picture on June 15, as it sets in the western sky during morning twilight. Over the next two weeks, watch as it drifts eastward, changing its phase daily and passing each of the planets in turn as it orbits the Earth.

This should not surprise you; it, too, is part of our Solar system and travels along the same path, though it does appear to stray a bit. That's because the moon's orbit is tilted by about five degrees to the plane of the ecliptic, so we sometimes see the moon appearing above and sometimes below the general path of the planets.

Seeing five planets at once is pretty cool, but if you want an even greater challenge and if you have a telescope and more experience, you may also be able to find the most distant planets Uranus and Neptune as well as two extremely faint dwarf planets Eris and Pluto.

Yes, it's quite rare for all these Solar system bodies to appear in the same sky, so be sure to check it out. And while you're out there, don't forget to notice one more planet, but this one won't appear in the sky!