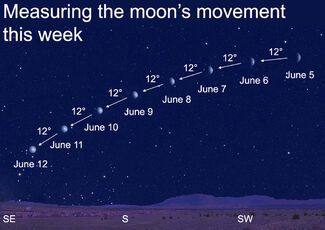 The position of an object along the horizon is called its azimuth, and it's always measured eastward from true north.

Gertrude Stein had the right idea when she penned the words "a rose is a rose is a rose" because its meaning applies to so much in life, including stargazing.

For instance, when astronomers measure the cosmos, we do so in degrees. These are not temperature degrees, but angular degrees.

I first came to know these units of measurement in 1966. There I sat in Mrs. Moyer's 10th-grade geometry class daydreaming, looking out the window and pondering everything except acute angles, circles and, yes, degrees.

"After all," I reasoned, "what use is knowing that a circle can be broken into 360 equal parts, each one degree wide? I've got better things to think about!" The irony is that out that very window existed circles that I would use every day (and night) of my professional life.

We can't see them, of course, but the heavens contain many "great circles", as we call them, that help us define the position and movement of all celestial bodies.

The easiest to imagine is the one we know as the horizon. Face due north and keep your eye on the horizon as you turn eastward. When you again face due north again, you will have rotated 360 degrees.

Three hundred and sixty degrees... so, just what does that mean? One degree along this circle equals approximately the width of your little finger held at arm's length. Yes, I know my little finger is fatter than yours, but my arm is probably longer too, so it's farther from my eyes.

You can use your thumb, too; at arm's length it appears about two degrees wide, and your fist from thumb to little finger spans about 10 degrees.

Another such circle is traced by the moon in its journey around the Earth. Since the moon makes one complete circuit eastward around the Earth every month (approximately 30 days), the moon must change its position nightly by about 12 degrees.

Check it out tonight. Notice which stars the moon is near, and tomorrow at the same time, check it out again. You'll find that it has moved about 12 degrees eastward. Now you can use your fist and fingers to estimate the moon's position on each successive night.

Many great circles exist in the heavens – the meridian, the celestial equator and more – and these help astronomers grasp the layout and movement of our starry night sky.

I'm sure my poor geometry teacher had a rough time reaching me, but she never gave up, and soon I became fascinated by how we can measure the universe with geometrical figures and angles, and how important it all is to astronomers.

And for that gift, Mrs. Moyer, I thank you... beyond all measure!