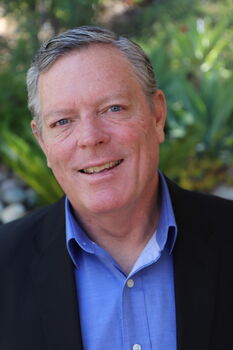 Dave Myers, a 35-year veteran of the San Diego County Sheriff's Department, and retired Commander of the Rural Divisions, including the fact he served in one, is sensitive and aware of the issues facing the rural outposts. All make him a unique candidate with a perspective of Sheriffs serving in communities, like Borrego Springs.

Myers is also running as a change maker, drawing sharp contrasts between generational policing with traditional attitudes and priorities of the past, out of touch with the cultural shifts and social demands for more inclusive policies for minorities: Latinos, Blacks, Indians, Women and sexual orientations. In other words, he wants to bring 2022 concepts of "Equal Justice for All," and "Equal Protection for All" to the Sheriff's Department.

"San Diego County is no longer the same as it was in 1950. However, many of the department's leadership and the Sheriff are still operating with the prejudices and failed policies from that era. I want to change that," Myers explains.

"There are earth shifting changes with new immigrant communities of Vietnamese, Somalia's, Iranians, Iraqis, Syrians and now, the Ukrainians. They join the other more entrenched communities of blacks, Latinos, gays and lesbians, and the East County's Chaldeans. There are not just cultural and language barriers that law enforcement must learn to deal with, but differing experiences and expectations. about police."

According to Myers, this requires a new kind of leadership, willing to work with the communities, to develop trust and mutual support.

"The culture of a department comes from the values, expectations, punishments and rewards from the top – the Sheriff."

Also, according to Myers, "Except for contracts with smaller cities, the department actually exists to serve the rural unincorporated areas in the County. The rural communities have gangs, homeless problems, robberies, and deaths by homicide; the same problems cities have, but on a smaller scale."

"Scales are always relative; and, I believe that people's experiences in rural communities must be treated with the same importance given criminal activity in cities. The problems are mainly a budget issue, requiring more deputies on a 24/7 rotating basis. I understand both the community's frustrations, and also that of the deputies."

Myers adds, "Rural deputies are often the best example of neighborhood policing, going out of their way to help people, because they know them, go to church with them, eat at the same restaurants, and undertake duties that other divisions don't have, like clearing boulders from roads after storms."

Another of the Sheriff's responsibilities is commanding County jails, which have been getting scrutiny from the media and state for having the highest prisoner death rate of any large prison in California.

"The Sheriff has the same obligation to protect the prisoners as he or she does the public. I will use tools available to the department as first steps. These are: placing cameras on jail personnel, and will not censor what they show, and immediate punishment for any sheriff employees involved in bullying, harassing, sexual misconduct, or worse," he said.

According to Myers, the current administration's failure to respond, or really make deaths in the jail a serious priority, has to do with leadership and attitudes about inmates that trickle down to personnel.

"Too often the color of skin, race, sex or sexual orientation plays a role in how people are treated in the jail. That can no longer be tolerated. I would give a mental health, health and drug screening to everyone coming into the jail, so that their placement in the jail, as well as officers overseeing them can provide both protection and appropriate treatment. The mission and goal, spelled out by the person at the top of the chain, has to be 'No more deaths in the jail'."

Myers adds, "Mental health should not be a death sentence. Neither should poverty. The same could be said of areas with high crime rates, which applies to cities for which the Department has contracts. Study after study has shown that when people don't trust us, and when we over-police a minority neighborhood, we are seen as occupiers, not peace officers. Yet we continue to follow the same old patterns. This old-fashioned approach has not made any dents in crime rates or its consistent rise, most of which occurs in neighborhoods where the people involved live."

"High crime rates are a neighborhood problem," he said. "We need to work with the neighbors if we are ever going to get a handle on it. There are many community organizations attempting to address criminal activity, we should be partnering with them as part of our policing strategy."

Myers believes, "While we talk about alternative sentencing for addiction and mental health, it's not really happening to the degree necessary to keep the jail population down and actually offer the individual help. These cases still end up in jail where the employees are not trained to handle their problems and impact on staff and other prisoners."

A better approach, Myers believes is to use the Sheriff's discretion in deciding whether to incarcerate or not. Because the department doesn't use alternative resources or placements, everyone from the mentally ill homeless person, to the heroin addict, is taken to the jail.

"My plan would be to fund and hold a bed or two in every facility treating addicts or the mentally ill, so that officers would have a better alternative than jail. It's a better solution for both the individual as well as the jail," Myers said.

"Currently, the department has taken a good step in partnering with the Psychiatric Emergency Resource Team (PERT) of social, mental health workers, and, in some cases, teamed with a deputy sheriff, who are available through 911 to step in where the issue involves mental health and addiction. They can do appropriate intervention and make resource referrals."

Myers also has a profound belief that most people in the Sheriff's Department mean well and want to do the right thing.

"The Sheriff's Department is full of good, well trained, well-motivated individuals. They deserve respect and appreciation within the department, and within the community as well. I believe morale is an important factor in policing and will do my best to instill a high level of morale. I will not play favorites; and promote on merit. On the other hand, individuals that abuse the privilege of wearing the badge will quickly be dealt with."

Bottom Line: "Changes in policing need to match the changing dynamics of a region's population, as well as the societies' changing hopes and expectations for equal justice. I believe I am the only person who is willing to talk about this; and I am willing to lead the Sheriff's Department in a new direction, developing law enforcement policies and practices that are effective in today's changing social dynamics."

Myers is running in a field of six candidates. If one of the candidates receives 50% plus one vote, they are automatically elected. If no candidate receives a majority, then the two top vote getters will run off in the November General Election.