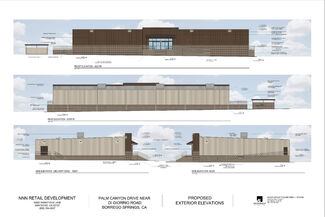 The June 2 Sponsor Group meeting opened with John Wells of La Casa del Zorro providing an update on fencing and landscaping around their Solar project at the intersection of Borrego Springs Road and Yaqui Pass Road. La Casa is working with Joy Lyndes of Coastal Sage, who was also the landscape architect for the Borrego Springs Library.

John Wells shared some photos of the proposed landscape palette consisting of rocks, pebbles, and plantings, as well as "lacing" of the chain-link fence. Examples of the lacing can be seen at https://www.lacasadelzorro.com/solar. Wells is also in touch with Ricardo Breceda to see if some small animal sculptures can be incorporated in the plan.

Wells invited the community to review the concept proposals as they are updated on the web site https://www.lacasadelzorro.com/solar and provide inputs to him directly at jwells@cweil.com. He also welcomed the community to walk the area with him.

The bulk of meeting time was focused on the plans for Dollar General on Palm Canyon Drive, west of J&T Tire and Auto.

In recent months, the planned Dollar General Store on Palm Canyon Drive, west of J&T Tire and Auto has been a frequent topic of discussion in the community. There are concerns that a chain store is not a good fit for the rural character of Borrego Springs, that the competition would hurt locally owned and operated businesses, that the chain exploits "food deserts" by delivering processed foods to low-income households. Others are concerned that these stores and their parking lots become magnets for criminal activity. Countering these concerns is a view that low-income households, and those lacking transportation access would benefit from the affordable products offered by Dollar General.

Sponsor Group Chair Rebecca Falk has been in communication with David Church, the project developer of the Dollar General store, for several months. She invited him to attend the June meeting to provide an update on the project, listen to community concerns, and answer resident's questions.

Speaking first, David Church said that partly due to strong community opposition and feedback, they had pivoted from their original proposal from a year ago of locating the store just west of Ocotillo Circle on Palm Canyon Drive. He offered that the community might consider the current location east of Christmas Circle, as better suited for commercial development.

As seen in the Elevation Plans reproduced here (see page 9), the construction is standard pre-fabricated metal that is delivered on-site. Once permitting is in place, typically construction can be completed within one to three months. Within the budget set for the construction of the store, as the developer, they have some leeway and are very open to getting community feedback on aspects such as façade and landscaping.

At the outset of the Q&A, Sponsor Group member John Peterson pointed out that there is nothing discretionary about the approval of the project by either the Sponsor Group or the County.

Sponsor Group member Bruce Durbin reminded the developer that Borrego Springs is an International Dark Sky Community so lighting must meet those standards, i.e., no flood lights, parking lot lights must be fully shielded and down pointed, and turned off at night. While the illustrations provided don't show the signage, Bruce Durbin requested that the sign be a monument on the ground, downlit to soften the impact. "Don't need a high sign that is visible for miles," he said.

Another discussion at the meeting was about the potential adverse impact to existing local businesses.

Nancy McCrae wanted statistics on how often Dollar General closes stores and exits a community where a store doesn't work out. Sponsor Group member John Peterson remarked, "Existing retail will go belly-up, and then when Dollar General leaves, we will be without retail." Jim Wermers, local owner of The Mall and The Center, agreed with the response from David Church that competition from Dollar General would cause local merchants to adapt their offerings. "Our local merchants are resilient," Jim Wermers said. But he suggested that Dollar General may not have adequately considered the slow season in Borrego when the snowbirds depart. "You have a huge store, so you may discover" that it is too big for the size of the local customer base.

There was debate about the suitability of the products that Dollar General offers relative to the needs of the community. Some people argued that Borrego Springs is an affluent community that does not need Dollar General, but David Church and others pointed out that low-income households, those lacking transportation, as well as seniors on limited income, would save time and money by having affordable products available locally. David Church disputed the characterization that Dollar General offers "inferior, processed food products to economically challenged populations." He responded that Dollar general offers, "brand named goods at good prices."

Another resident agreed that "a little bit of a shift in competition, more things on the shelves would benefit the community." Among the population segments that were not represented at the meeting, she pointed out that "several new families have moved in here – the only place in San Diego County that people can afford a home. Young families are moving in here and they are changing the flavor of Borrego in a nice way."

A final topic was about permitting and compliance. David Church explained the reasons why the building materials have been delivered and stored at the site prior to closing of escrow. Due to supply chain issues, he said, they ordered the materials months in advance, in anticipation of closing escrow and obtaining permits. The fencing was added to secure the materials. At this point, they have logistical issues with moving the materials away. They have been surprised by the size of fines. Jim Wermers pointed out that permits even for very small projects, such as adding a bathroom to an existing property, can take a year. A project the size of a big store like Dollar General could take years. "Get the material off the lot if you don't want to pay the fines," he suggested.

Specifically looking at the planned design, Jim Wermers noted the building was raised 4+ feet to meet the floodplain regulations. He noted that the 40- to 50-foot-long ADA compliant ramp would be very inconvenient for wheelchair-bound customers. He suggested considering a redesign to raise the parking lot.

At the conclusion of the discussion, David Church agreed to continue to engage with the Sponsor Group and the community. Captured here is the list of suggested improvements that were proposed at the meeting. In a subsequent email to me, Elena Thompson, local resident and real estate professional, included examples of local commercial buildings that the developer could look at for ideas on what works well. I have included those suggestions here.

Façade Design Improvements. Consider shade awnings, painting in faux windows. Southwest or mid-century look to be consistent with the village. Earth tones, desert colors, instead of reflective metal. As examples, consider the Chamber of Commerce, Borrego Water District, The Mall, The Center, and other buildings along Palm Canyon Drive.

Landscape Improvements to soften the exterior, such as large rocks, mounds, and a statue. No fencing around the property. Again, there are several examples along Palm Canyon Drive.

Signage muted to fit in with the village. Avoid large signage, neon signage.

The Sponsor Group will not meet during the months of July and August. The next meeting of the Sponsor Group is scheduled for September 1, 5 p.m. at the Borrego Springs Library and via Zoom. Email the Sponsor Group Chair Rebecca Falk rebfalk7@gmail.com to be placed on the mailing list to receive the agenda for the meeting.

During the summer, Sponsor Group members will continue to pursue matters relevant to the Borrego Springs community. Chair Falk has appointed the following members to serve as points of contact for the specific areas:

- Nancy McRae (once she is seated as a Sponsor Group Member): 18-Wheel Trucks,

- Jim Dax (once he is seated as a Sponsor Group Member): Fallowing of Agriculture Lands.

To communicate with the Sponsor Group on these topics, you can send email to the Chair Falk at rebfalk7@gmail.com who will forward the email to the appropriate member.

John Peterson is the Chair of the Water and Land Use Subcommittee. John continues to emphasize the lack of good data on groundwater levels in the northern half of the basin. The next meeting of the subcommittee is next week on Wednesday June 15, 2022, 3 p.m. You can email John at petersonenv@hotmail.com to be put on the email list for the agenda and link to attend. If you are concerned about inadequate groundwater monitoring, consider participation also at the monthly meetings of the Borrego Watermaster.