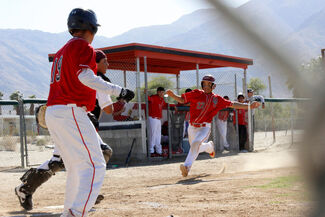 Seniors Cesar Ochoa, pitcher, and Even Padilla, centerfielder, reach home safely in the bottom of the second inning.

Despite a solid lead heading into the fifth inning for the Rams, crosstown rivals, the Julian Eagles tacked on a few runs to get back into the game.

The Rams managed to tie the Eagles in the sixth inning, however, the Eagles had a few tricks up their sleeve, sliding by with the lead.

The team previously faced Gompers Prep Academy and Bonsall at home, dropping both, 11 – 3 and 23 – 12, respectively.

The team had everything working in their favor with hot bats, defense working all around and stellar pitching. But they could not close it and get past Julian's relief pitcher to induce a few more runs.

This was also the teams last game of the season. The Rams have concluded their season, due to unforseen circumstances.

After an error, the Eagles were on the first 1 – 0. Despite allowing a few walks, senior Cesar Ochoa, who was given the nod to start, managed to get out of the jam to prevent further damage.

The Rams answered right back in the bottom of the first inning.

Senior centerfielder Even Padilla managed to get on base with a single down left, and sophomore Alejandro Morales was patient at the plate and joined him.

The Eagles could not get anything out of Ochoa in the second, and the Rams continued right where they left off.

Even with two outs on their back, that did not stop the Rams from getting something going.

With two on base, Ochoa and Padilla, senior short stop Daniel Arias found a gap down left field for a two RBI single, 4 – 1.

Morales and Marin each followed with an RBI single, respectively, as the Rams led, 6 –1.

Neither team was able to produce anything in a short third inning.

The Rams managed to get one more run in the fourth to extend the lead, 7 –1.

The Eagles managed to find a weakness for the Rams and were able to make the game much more competitive after a pitching change.

The Eagles chipped away with runs, in the fifth and sixth inning, and took the lead, 9 – 7.

However, the Rams would not let it slip away, as they managed to tie the game, 9 – 9.

Garcia and Marin started the sixth inning off with a single, respectively. Despite back-to-back outs, senior first baseman Moses Garcia had himself a two-RBI single to bring the duo home.

It was another pitching change for the Rams, but it did not stop the Julian Eagles to score more runs in the seventh. The Eagles brought in two runs to take a 11 – 9 lead.

The Rams had a chance to answer right back with a walk to begin. However, they were not able to bring anything in, as three easy outs followed, and the Eagles went home with the win.