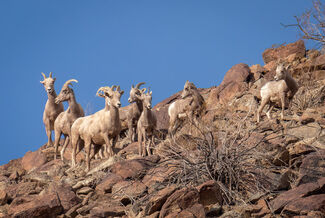 Dedicated volunteers who spend some of the hottest days of summer at remote waterholes counting bighorn sheep are rejoicing at the announcement by Anza-Borrego Desert State Park that the annual census will return this year.

Park Senior Environmental Scientist Danny McCamish made the announcement via e-mail that count dates have been tentatively set for July 8 – 10. Training will be scheduled about two weeks in advance of the count.

Veteran sheep counters as well as interested newcomers who would like to participate can contact McCamish at Danny.McCamish@parks.ca.gov, no later than June 1. Title your e-mail "2022 Sheep Count Volunteer Info."

The past few years have been challenging for the annual summer wildlife project.

The 2020 count was scaled down due to COVID and last year an unfortunate death of a volunteer during a hike to cache water prior to the event resulted in cancellation of the 50th annual count.

The death underscored how difficult the sheep count can be. When running at capacity, nearly 80 volunteers spread out to 20 locations where there may be water sources that attract the majestic bighorn.

Typically, counters are in the field during some of the hottest summer days, and that's on purpose. As summer heat withers waterholes, sheep will be drawn to the few places where they can still get a drink.

Some of those locations can be reached by vehicle or short hikes, allowing participants to return to lodging each night.

Other locations are more remote, requiring lengthy hikes and counters spending the entire time in the field.

Last year's cancellation, especially on what was to be the 50th anniversary, was not popular with veteran counters, many of whom have been participating for over 30 years.

Some labeled the cancellation as an over reaction since there had never been a serious injury during the history of the event.

Veteran counter Callie Mack was also upset that important data would be lost when the count was cancelled.

"The Sheep Count is important to gathering sheep data up-close that can't be seen from a copter. It's very important to help the park decide how to protect the sheep as climate change takes off. The Sheep Count has a long history of safety that shouldn't be marred by one outside-the-event death, however unfortunate," Mack said after last year's cancellation.

It was not an easy decision for park officials who are charged with protecting the public as well as the resource.

Citing concern for the safety of sheep counters, who often endure several days of triple-digit heat, State Park officials decided to halt last year's count until training and safety issues were reviewed. With daytime temperatures hovering at about 117 degrees, it was also decided to close Hellhole Canyon, The Slot, and Palm Canyon to all hikers to avoid heat-related emergencies.

The annual bighorn sheep census is a valuable citizen-science contribution to the welfare and understanding of the bighorn sheep population.

Volunteers record sheep numbers, range conditions and the health of the animals. They are trained to look for signs of disease and their collective census efforts give an annual snapshot of animal numbers, herd condition, and birth rate.

For those who participate, it's an intimate look as one of the most magnificent creatures in the park. Counters located a distance away from the water source with a clear view that will allow them to observe bighorn activity.

Desert bighorn sheep numbers have rebounded in the park since the census began.

Sheep populations are currently estimated at between 900 and 1,000 throughout their range that extends along a narrow band of the western desert edge from Mexico to San Jacinto in Riverside County.