Oh Mother, What A Day! 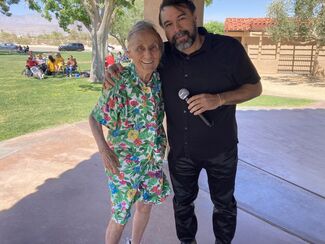 The wind gusts reached 50 mph but that did not blow away the joy and celebration that was Mother's Day on Sunday, May 8th, in Christmas Circle. Sponsored by OLAX (Organizacion de Latinx), this fun-filled day marked the debut of OLAX, a local group formed to sponsor and represent our Latinx, Spanish speaking population in all things Borrego.

Borrego's Elementary After School Dance Group began the day with their upbeat and colorful dance routines followed by former student and now recording artist, Miguel Angel Millan, and his brother, Jesus Gabriel, harmonizing on some beautiful Mexican songs. Next up was the foot-stomping, "gotta get up and dance" music by Los Villanos de Borrego, starring local 10th grader Adrian Marin on drums. With singer Israel Ochoa at the microphone, the crowd was soon on their feet and having a grand old time - at times fighting to stay upright against the wind with dance moves of its own! Closing out the day was guitarist Tim Wadhams, sharing his melodies and unique sound.

In spite of the feisty winds, everyone reveled in the joys of motherhood from the mothers with the most children, Lucina Torrez and Maria Bravo with 6 each, to the oldest mother, Virginia Perrine at 91. The Best Dressed Mom Award went to Maria (Concha) Abrica who received a gift basket from Borrego Outfitters filled with sweet smelling and tasty goodies.

Tasty was also the word to describe the scrumptious plate of food prepared and served to 200 folks free of charge by local catering entrepreneurs, Penny and Betty. Chicken fajitas hit the spot followed by homemade cookies each placed beautifully in little gift bags by Amy Wandalowski.

This lovely event was possible due to a generous donation from Rams Hill as well as support from Borrego Springs Soroptimists. Organizer Esmeralda Lopez-Garcia created a memorable day for our Borrego Mothers, a group so worthy of our respect and admiration.