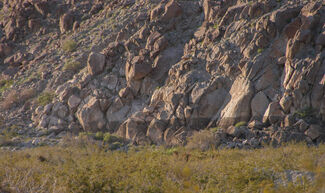 Standing in the desert sands at the rugged toe of the Fish Creek Mountains, it's hard to imagine this was once under water.

But looking up, you see a line near the bottom of the bouldery mountain that marks the high water of an ancient inland sea that vanished about 400 years ago.

Looking down, you may find bleached shells scattered about the desert, confirming the presence of a lake.

This 150-mile-long inland sea that lapped at the boulders of these mountains was known as Lake Cahuilla, a much larger version of the current Salton Sea.

In its prime, the lake extended from north of present-day Indio and south into Baja, California, covering what is now El Centro and Mexicali.

Also known as Lake LeConte or Blake Sea, it was a destination of Native Americans during the seasonal migrations.

Today's bathtub rings at various places like Fish Creek Mountains and Travertine Point at the eastern tip of the Santa Rosa Mountains are reminders of the lake's existence.

This ancient waterline sits at an elevation of about 80 feet, compared to the current level of the much smaller Salton Sea at about 230 feet below sea level.

The large inland sea was created by shifting sediments near the Colorado River delta that altered flows into the Salton Basin, with the highest water levels reached about 40,000 years ago.

Over centuries there were lake cycles where it grew and receded, but about 1600 it apparently began to vanish.

There are historical records from as early as 1605 of reports from natives of the lake's existence, but De Anza in 1774 passage through the area made no mention of it.

The ancient shoreline of Lake Cahuilla is dotted with archeological sites, including campsites and crude rock fishing weirs used to trap fish.

Remnant trails along the lake's edge can also be seen by the observant traveler.

To view the ancient shoreline, turn east from Split Mountain Road along the railroad tracks that exit from the gypsum mine.

Keep an eye to the right as you travel east and south and watch for the distinctive old bathtub ring near the base of the rocks.