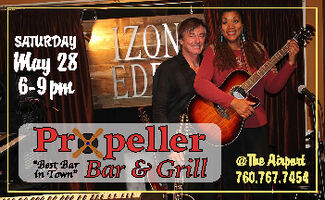 I went to the Propeller Restaurant for dinner the other night and was surprised to see the place packed with wall-to-wall pilots. They had just finished their competition, the most attended ever. Izon Eden were performing after a long absence from the town due to the COVID situation. They were happy to be playing here again, as were their fans happy to see them.

I had a delicious hanger steak with herb butter, not often found in restaurants, and enjoyed it with a few glasses of the Napa Valley cabernet sauvignon supplied from local Kimberley Jones' vineyard in Napa.

I then decided to enter the sanctuary of cheffet and manager Sally Walsh's kitchen, an English woman transplanted to Borrego. I found out she was also the art critic of the Borrego Sun. A woman of many talents, I asked her how she liked being a cheffet as she calls herself, and about the restaurant, she said, "I fell back into 'cheffing,' as I chose to call cooking when several months ago the Propeller Head Chef had a serious cut to his finger and could not go back to work."

She continued, "It's been an exciting gastronomic adventure ever since working alongside our charming, entertaining Bar and Restaurant Manager Jodi Garcia. We're staying open for most of the summer with a refreshing summer menu. We have added interesting salads, new pasta dishes, alongside our signature garlicky shrimp linguini and popular enormous double landing burger."

They are also adding some vegan options that are more interesting and not boring.

She then told me that the band Izon Eden will be performing regularly during the summer months, starting Saturday May 28.

Ending our conversation by saying, "Jodi and I welcome Borrego summer residents to come and see us, and we are open for lunch on the weekends."

Sally and Jodi are great characters and it is worth a visit just to talk to them, at least there is another venue open this summer. I'll be there, sipping a martini or two, looking out at the heat and the mountains or maybe sampling one or two of Jodi's famed margaritas.