A Planetary String of Pearls 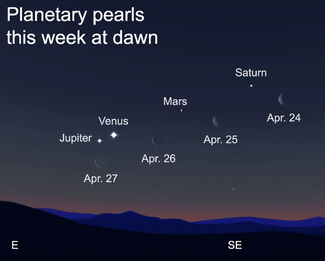 At dawn, gaze toward the southeastern sky and you'll see the brilliant planet Venus, with bright Jupiter to its lower left. To their upper right lie two equally bright planets: the Red Planet Mars and the Ringed Planet Saturn.

A beautiful string of planetary pearls shines at dawn right now, but one of the coolest sights of the early morning sky is completely invisible.

Stargazers who know something about astronomy can find it every night and morning but, unfortunately, most will not realize its true significance. I'm referring, of course, to the geometric plane of our Solar system.

We know that our Solar system includes the planets, the sun, moon, comets, asteroids and tons of other stuff like dust and chunks of ice and rock. Nearly everything orbits the sun in a geometric plane, the result of our planetary system's birth from a rapidly spinning disk billions of years ago.

From within, we see this plane as an arc across our sky; it represents the general paths that the sun, moon and planets take on their journeys through the starry heavens. We call it the "ecliptic" because it is along this arc that the sun and moon also appear to travel and it's the only place where eclipses can occur.

The ancients recognized this arc also but, of course, did not understand its significance. So, they devised 12 stellar groupings to mark its position, and knew it as the zodiac among which their gods (the planets) appeared to wander. This week, the zodiac constellations that appear at dawn are (from west to east): Virgo, Libra, Scorpius, Sagittarius, Capricornus, Aquarius and Pisces.

And this week sky watchers can find on the ecliptic four of the five visible planets, and the moon!

At dawn, gaze toward the southeastern sky and you'll see the brilliant planet Venus, with bright Jupiter to its lower left. To their upper right lie two equally bright planets: the Red Planet Mars and the Ringed Planet Saturn.

Trace a line through these planets and you will outline the ecliptic. Since this arc also represents the general path that the moon takes as it orbits the Earth each month, you can watch during the week as the waning crescent moon glides along it from morning to morning. At dawn on April 24, the moon will appear just to the lower right of Saturn, and on the 25th it will have drifted eastward to appear just midway and below Mars and Saturn.

By April 26, the thinning crescent moon will lay below and between Mars and Venus. And on the 27th the moon's crescent was just below Jupiter.

Keep watch on all of these objects for a while and you'll notice that they all move through the heavens. In fact, on the morning of April 30 Venus and Jupiter will have converged in the sky to appear less than half a degree apart; don't miss seeing both these planets together with a low-power telescope!

Stargazers who are unaware of the workings of our Solar system and its changing appearance in the sky will be stunned by this apparent "alignment" of the planets and will often interpret it as something of supernatural significance.

I'm not too worried, though. The planets and the moon have behaved this way for billions of years. If ever they don't appear this way, then I'll be worried!