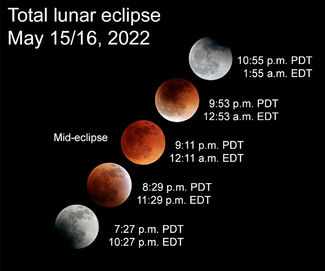 Unlike an eclipse of the sun, a lunar eclipse is perfectly safe to view without protective filters.

I just love eclipses. Not only are they fun to watch, but an eclipse is one of the few cosmic phenomena where we can see the movement of our heavens.

If you're as intrigued by these celestial events as I am, then you must plan to be outdoors on Sunday evening, May 15. Oh, you've already got other plans, you say? Break 'em! You definitely won't want to miss this dramatic prime-time total lunar eclipse!

The cosmic coverup begins officially at 7:27 p.m. PDT (10:27 p.m. EDT), as the moon's eastern edge slips gradually into the Earth's dark inner shadow – the umbra. Stargazers in most of North America will see the moon fairly high up in the southeastern sky at that time; some on the North American West Coast, however, may see the moon rising over the horizon with the show already in progress.

For the next hour or so, the moon will dim as it enters deeper into our planet's umbra until 8:29 p.m. PDT (11:29 p.m. EDT) when it becomes completely eclipsed.

During totality, the eclipsed moon may take on a strange coppery hue. This color occurs because sunlight passing through our atmosphere is reddened and bent inward toward the darkened surface of the moon. Just how red and dark it appears depends on the clarity of our planet's atmosphere at the time sunlight passes through it. The totally eclipsed moon can appear almost any color from bright orange to dark brown – or be completely invisible.

Unlike some other celestial events, you can watch the eclipse from under the bright lights of a city, but for a truly dramatic view, head out under dark rural skies. Here, during totality, you'll see the moon's ruddy orb suspended in front of the faint stars of the constellation Libra, the scales, and hanging just above the bright reddish-orange star Antares.

We don't see lunar eclipses frequently because the celestial geometry must be just right for the Earth's shadow to fall onto the moon. Since the moon's orbit is tipped about five degrees to the Earth-sun plane, the moon only occasionally passes through our planet's shadow. That's why we don't experience a lunar eclipse during every full moon – or a Solar eclipse during every new moon.

Unlike an eclipse of the sun, a lunar eclipse is perfectly safe to view without protective filters. All you need is your eyes, but if you have binoculars or a small telescope, you'll find that viewing through these may be even more enjoyable.

To learn more details about this eclipse, and even where you can watch it online, visit timeanddate.com and click on "Lunar Eclipse Countdown." And to find groups in your area that might be hosting a free lunar-eclipse telescope viewing party, check with your local planetarium, college or amateur astronomy club. Visit go-astronomy.com and click on the "Clubs & Orgs" tab.