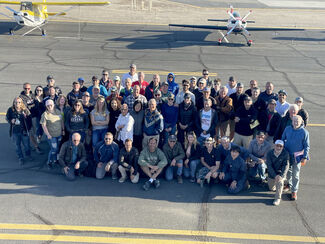 The International Aerobatic Club Chapter 36 San Diego Hammerheads were back in the skies from April 21 – April 23 at the Borrego Valley Airport for the annual Spring Roundup competition. Even the windy weather conditions could not stop the enjoyment of the competition.

"It's amazing to be back here! Borrego is known throughout the aerobatic world and we had people come from as far away as Texas just to fly in this contest because they heard wonderful things about Borrego." Contest Director Bryan Jones said.

Last Spring Hammerhead was not as advertised as this year, due to the looming COVID-19 guidelines that were ever so changing during that time.

There were 47 pilots registered in this year's competition, the largest contest dating all the way back to 1994. They flew 213 flights over three days.

Despite a few of regulars sidelined due to mechanical issues, that was made up for with 19 competitors in the Primary category.

"These are pilots who are just starting their aerobatic careers and we love that they get to do that in Borrego. Had all of our regular attendees made it, the contest would easily have hit 55 to 60 pilots, which is almost the size of the National Championships!" Jones said.

The wind on Friday definitely made things challenging, he said.

"It's hard to fly precise figures when the wind is blowing 30 knots! We always fly our competitions from East to West so that we keep the airplanes and noise away from downtown Borrego," Jones added.

Pilots AJ Wilder, Howard Kirker and Hiroyasu Endo made their appearance, setting high standards as usual, with the absence of well-known pilots Jim Bourke, Susan Bell and Rory Moore. But new competitors flying in their first contest made themselves known.

After the five competition categories, many enjoyed watching the Hammerhead finale, which was a four-minute freestyle with trailing smoke by experienced Unlimited pilots. However, that freestyle was pushed back to Saturday, due to the high winds.

The four-minute free has no limit to the number or style of figures and can be flown with smoke and music in order to add points for presentation. The competition consists of flying for four minutes. Any long or shorter could be subject to penalties that can drop a pilot from first to last. However chaotic it may look to the spectator, it is judged to standards like the rest of the competition.

Alex Huey beat Howard Kirker in Intermediate – Kirker is a former Unlimited pilot who stepped back down to Intermediate in a low-power biplane and almost always wins. His flying is immaculate, so Alex's victory is a real achievement!

AJ Wilder is a member of the 2022 U.S. National Unlimited Aerobatic Team that will represent the United States at the World Aerobatic Championships in Poland later this year.

Pilots will be back in October for the annual Akrofest Competition, to be held October 27 and October 28.

The Akrofest Competition in October is a premier event, as the chapter touts their aerobatic box as "the world's finest aerobatic box – built to CIVA standards, designed to host the world championships, and practically visible from space," said IAC President Bourke, who is also one of the top stunt pilots.

Chapter 36 is one of three IAC chapters operating in Southern California, founded in the 1970s. IAC is a non-profit organization, as are all its member chapters. They are also a division of EAA, an organization that promotes the sport of aerobatics, provides standards for measuring the quality of aerobatic flight, and is the central governing board for contest aerobatics. IAC also works with the FAA in matters regarding aerobatic flight and associated regulations. While IAC operates at a national level, local chapters within the organization operate at a regional level.