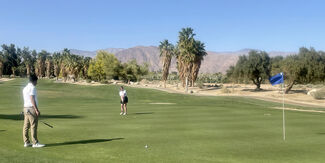 Aleksandra putts while next up is Julio.

The Borrego Rams Golf Team, under the supervision of Coach Tim White and Assistant Coach Rich Mossay, played a league match with boys and girls against Calvary Christian Academy here at the Springs at Borrego course on April 7, and there's good news: "We won, 341 to 331!" Coach White said. The Rams won the last match they played on March 21, also against Calvary Christian.

Coach White gave a safety and protocol talk prior to the match, emphasis on health & safety by drinking plenty of water and not succumbing to the unseasonable 95+ afternoon temp. Also, to both save time and prevent dehydration out on the hot course, players were required to pick-up if they reached 3-over par (which many players on both sides had to do).

The two teams played a shotgun format for the Front-9 course, with par at 36. I camped out at Hole #3 as the three tiers of players passed through. The final tier, having started on Hole#1 and playing the 180-yard+ Par-3, found Brody White making a fine 50-yd approach shot to within 3-feet of the pin, and he scored a true par. He was also low-scorer for the Rams team at 63.

Also on the Par-3 3rd hole, Julio Medina and Aleksandra Buchowiecka holed it out on their 6th shots.

The Rams final match scores were as follows: Brody White scored lowest individual score on the team with a 63; Aleksandra finished in very respectable 2nd place at 65; Anthony Thompson finished 3rd with a 66; Julio Medina shot a 67; Andrew Aguayo finished at 70; and William Nagle shot a 72.

Even after downing a quart of Gatorade, that was about all the heat I could take, and besides, the boys and girls were doing fine, communicating well by helping each other with golf rules and protocols. They were also having fun out there.

The Rams next match is on Apr. 12, away at St. Joseph Academy for 9-holes on their Boulder Oaks Blue course, and they have about six games after that before the Championship Rounds.

Note to Borrego High golf fans: I won't be around for the finals, as this is my final golf article for the Sun, but I'd like to thank the coaching staff of Tim White and Rich Mossay for all their help in getting the scores and highlights to our readers.