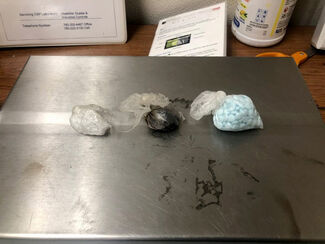 Drugs that were allegedly seized during a vehicle inspection at the Highway 86 border patrol checkpoint. (U.S. Customs and Border Patrol )

U.S. Customs and Border Protection reported that agents from its El Centro station intercepted a drug haul near the Salton Sea, including a package of fentanyl.

At approximately 9:10 a.m. on March 18, agents stopped a black Mercedes Benz C-Class as it approached the Highway 86 border patrol checkpoint.

After being referred to secondary inspection, a border patrol K-9 team helped agents find a green pouch hidden in the car's dashboard area.

Further inspection of the pouch, agents discovered it contained three bundles of narcotics, including 16.9 grams of heroin, 8.9 grams of methamphetamine, and 24.99 grams of "M30" pills that tested positive for fentanyl, according to a U.S. Customs and Border Protection news release.

The 41-year-old male driver from the United States was arrested and turned over to the Drug Enforcement Administration, according to the agency. His identity was not released.