The Falling Stars of April 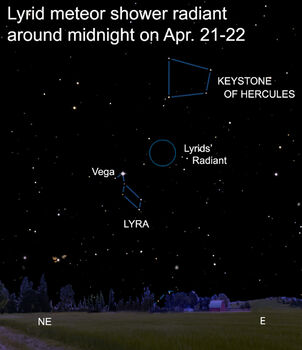 The Lyrid meteor showers occur when the Earth slams into the dusty debris expelled by the ancient comet Thatcher.

I had just begun one of my popular outdoor Night Sky Tours the other night when my guests erupted with gasps and cheers. While I wanted to believe that it was my captivating repartee that excited them, I knew exactly what had happened.

They had seen a brilliant meteor exploding in the sky just over my shoulder. Of course, I quickly took credit for producing the spectacle as a dramatic opening to my program but, sadly, no one bought it.

It's always remarkable to see how surprised people are when they spot a meteor since these are not that uncommon. In fact, on any clear, dark night, the average stargazer can often see three or four every hour – if they're far from city lights and gazing skyward.

As dramatic as these "falling" or "shooting" stars might appear, most are random specks of interplanetary dust no larger than a sand grain that burn up in our atmosphere at heights of 50 miles or higher.

There are times of the year, however, when we can see more meteors than usual, and we're treated to what astronomers know as a meteor shower. These occur when the Earth encounters swarms of interplanetary dust particles – most the size of only a grain of sand – and we can see dozens falling every hour.

The most famous of these is the Perseid shower in mid-August. It's quite a dramatic show, and it's probably a favorite because it occurs during midsummer when people are outdoors late at night.

There was no need to wait until August, though, because there was a shower on the week of April 17, as well: the Lyrid meteor shower. The Lyrids occur when the Earth slams into the dusty debris expelled by the ancient comet Thatcher.

Astronomers forecast that this year's Lyrid shower should reach its peak in the hours before dawn on Friday, April 22, but stargazers who are outdoors the night before may also see a few zipping across the sky.

The moon will be in its last quarter phase that morning, but if the sky is clear and you're far from city lights, you may still see as many as 20 meteors each hour just before dawn.

Meteors that appear to come from some other direction are what astronomers call "sporadic" meteors – random flecks of cosmic schmutz that just happen to collide with our planet.

Despite the Lyrids' relatively low numbers, this shower can often produce bright, fast meteors, and about 15% leave behind persistent smoky trains that one can watch with binoculars for many minutes after the meteor itself has disintegrated.

I guess we'll find out!