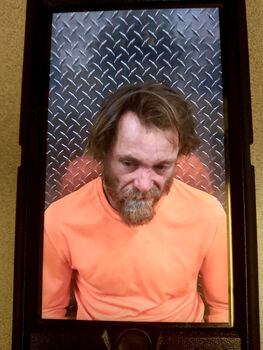 After extensive damages to The Mall and Center on March 13, suspect John Benjamin Greenwood has been served with a restraining order while in custody.

Property Manager of The Mall & Center Susan Percival went to the county court to file the restraining order on Greenwood on March 15.

"He is not allowed at The Center, The Mall or in the vacant lot east of the Mall. If you see him anywhere on these properties, please call the Sheriff Dispatch # 858 565-5200," she said in an email to Mall and Center tenants and business owners. Despite his arrest and restraining order, he is expected to be released and possibly return to Borrego. In the past, it is said that Greenwood has told the sheriff he continues to come back to the town because the people "give him cash" and "the food banks are so great."

The Mall and Center owners, as well as residents were shocked to see the vandalization of properties on the account of Greenwood. To confirm, the damage he did on March 13 was nine broken windows, two doors and destroyed the public restroom.

An accurate total cost has not yet been determined, but is in the range of $20,000, according to Mall and Center Owner Jim Wermers.

Wermers added that per Firehouse Glass, the windows of the businesses that faced damages should be replaced within the week, which happened after print of this article.