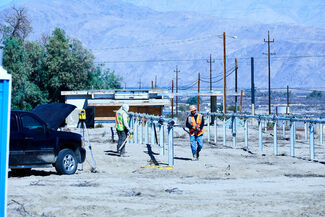 The estimated time for completion of the La Casa Del Zorro Solar (LCDZ) Project has been pushed back a bit, now expected to begin electrical generation in about 60 days. It's taken almost three years to get to this stage.

"Delays are nothing out of the norm," says LCDZ owner Jack McGrory. He chuckled slightly when adding, "You'd think that for this "sustainable" project there wouldn't be that many hurdles to overcome."

Local and regional bureaucratic necessity, plus construction delays (some caused by weather), are merely part and parcel of the process, according to McGrory. He and his partners have pumped over $10 million dollars into the LCDZ property and have yet to return a cash distribution to them.

The LCDZ project is a 750-kilowatt photovoltaic installation that will cost a total of $2.5 million when completed, and it's being erected at the intersection of Yaqui Pass Road and Borrego Springs Road on 4.5 acres of the 6.72-acre parcel. The Project consists of a Solar array utilizing single axis trackers, six 125-kw inverters, and related electrical equipment. Over 2,300 panels are arranged in 20 rows, with each panel generating about 400 watts of electricity. There will be a low-profile and hopefully aesthetic perimeter fence with a 50-foot setback from the Solar array.

Socio-economic benefits are certainly inherent in the Project, with LCDZ having served as a major employment hub in the Valley. LCDZ is now operating with a staff at about 75% employment, and McGrory said he wants to reach 100% as soon as possible. In addition, environmental sustainability will be achieved by using Solar to reduce electrical energy costs at LCDZ, plus reducing fossil fuel dependency for electrical generation from the SDG&E grid. The expected payback time for this Project (and most other commercial projects) are expected to take five to seven years, according to McGrory.

The Project was reviewed by the Borrego Springs Community Sponsor Group at two meetings, chaired by Rebecca Falk, who provided the following history:

"At the January 2, 2020 Sponsor Group Meeting, the Group voted unanimously to continue our consideration to a future meeting after raising objections to the location of the project. La Casa was asked to pursue other locations. The project came back on the Sponsor Group agenda on January 7. 2021, with a presentation about the investigations La Casa had undergone to see how the project could be situated elsewhere.

"Since they were unable to relocate the project, yet it remained essential for containing utility costs for La Casa, the Sponsor Group approved the project with a vote of five in favor, one absence and one vacancy, with a promise that La Casa would come back to consult the Sponsor Group and community with plans for a more aesthetically pleasing fence or wall, or landscaped fence or wall, around the project than was in the original plans.

"John Wells of La Casa has indeed been in touch with the Sponsor Group and has appeared with an update on the project at our January and February 2022 meetings after sending an update in December 2021 that he had been working through project conditions since the County approved the permit in May of 2021 and was ready to begin construction.

"We expect to have more updates and consultation from John Wells on making the wall or fence more aesthetically pleasing in upcoming meetings."

Other concerns about the Solar project included site drainage, wind effects of blowing sand, sun/heat degradation of plastic parts, aesthetic aspects of the array and fencing, and even the possibility of using other pieces of vacant land on the property for the Solar array. But other pieces of LCDZ property are being saved for potential expansion, according to McGrory, so that option was therefore not adopted. The County looked at the other issues prior to issuing permits.

It will be good to see all those kilowatts registering on a meter. Stay tuned.