Finding the Horse and Rider 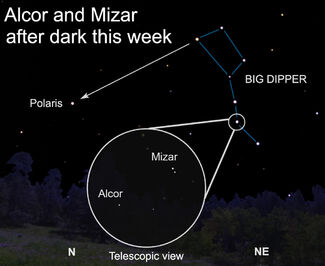 Look at the bend of the Big Dipper's handle to see if you can spot a "double" star. These are known by their proper names Mizar and its fainter companion Alcor, also called the "horse and rider."

We terrestrial stargazers have it easy. We orbit a single star, and we look out at the starry heavens and believe that all stars are like the sun. In some ways that's true. All are globes of mostly hydrogen that shine by a process of thermonuclear fusion occurring deep within their cores but, as astronomers have learned, that's where the similarity often ends.

Today, we know that stars can be larger or smaller, redder or bluer, hotter or cooler, than the sun. Many stargazers are surprised to learn, however, that between half and three-quarters of all stars are actually part of systems in which two (or, sometimes, more) stars orbit a common center of gravity.

Even a quick glance around the night sky will reveal many stars that seem to have a "companion" nearby. More often than not, however, these stars are not physically related, but simply appear close together in the sky. Astronomers know these as double stars.

We can find a classic example of these low in the northern sky after dark, especially with binoculars or a small telescope.

Whatever we call it, its seven nearly equally bright stars are not easy to miss. They form the shape of a bowl with a bent handle that, right now, appears to be standing on its handle in the northeastern sky after dark. And it's at the bend of the Dipper's handle that an interesting object resides.

Look here to see if you can spot a "double" star. These two are known by their proper names Mizar and its fainter companion Alcor, also called the "horse and rider." If you cannot see both stars with just your eyes, aim binoculars in their direction and you should have no trouble at all.

It was the 13th century Persian writer al-Qazwini who wrote that "people tested their eyesight by this star." The 14th century, Arabian writer al-Firuzabadi referred to it as Al Sadak ("the test" or "the riddle").

Seems rather odd, though. Both stars are easily visible to most people today, even in moderately light-polluted regions.

Has human eyesight improved that much over the past six or seven centuries? Or has the fainter star Alcor brightened significantly since medieval times? No one knows for sure. What we do know is that Alcor and Mizar, though they appear close in the sky, are not physically related to one another. The pair is what's called an "optical double", two stars that just happen to appear roughly along the same line of sight. Mizar, the brighter of the two, is actually part of a physical binary system (two stars that orbit a common center), and you can see its faint companion star with a small or medium-sized telescope.