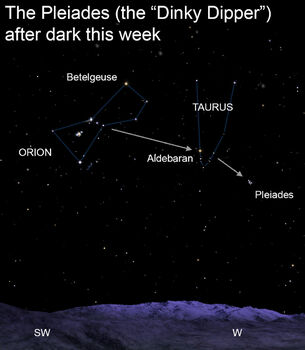 Many people looking into that part of the sky today insist that the stars of the Pleiades outline the Little Dipper. Not so, of course; at this time of year, the Little Dipper hangs down from Polaris, and is considerably larger than this cluster.

Pay attention to your everyday world and you'll soon realize that we're surrounded by astronomical words. The days of the week are named after the five visible planets, the sun and the moon. Go to a theater and you may see a film by Orion Pictures, or stay home and listen to SiriusXM radio. Much of our popular culture – from Polaris submarines to Beetlejuice (aka Betelgeuse), the zany character played by Michael Keaton -- have names that originate in the stars.

Subaru? Yes, indeed! In historical Japanese sky lore, Subaru represents the Pleiades, one of the most noticeable star clusters in the sky. To see this tiny, shimmering cluster – also known as the Seven Sisters – simply go outdoors after dark this week and look high in the western sky. Of course, you can also see the Pleiades in broad daylight as well, just wander around any parking lot and check out the emblems on the front of the cars until you spot it!

In Western culture, the name "Pleiades" is believed to derive from the Greek word meaning "to sail," because when the grouping was seen to rise just before the sun, it was a sign of the opening of the navigational season in the Mediterranean world. In Greek mythology, these stars represented the seven daughters of Atlas and Pleione and were pursued relentlessly by the great hunter Orion.

Eastern culture, however, saw it quite differently. Much of the Subaru myth arrived in Japan from China, and the term may have Buddhist roots. The word is generally thought to mean "united" or "getting together". The Chinese character for Subaru (kanji) also has connotations of being "bright," and so the "bright" Subaru stars seem to "get together in one place."

Over time, the lore was modified for local religious customs, or planting and fishing seasons. For example, in some farming regions, the stars of Subaru were seen as seeds, and their rising with the springtime sun signaled a time for planting. In some coastal areas, Japanese fishermen saw a fishing net made of stones and bamboo (Sumaru), and similarly used the rising and setting of this bright "net" to determine when to cast their own nets into the sea.

As in Western lore, the Japanese often saw seven stars instead of six in Subaru. Travelers to Japan may be familiar with Shichifukujin (literally "seven happy gods"), and locals in some areas still call the Pleiades "Shichifukujin".

Imaginary lines connecting the stars of Subaru enable Japanese stargazers to outline such things as a strainer (Kozaru), a rather square sake cup (Masuboshi) pouring out rice wine, and even something resembling a person's elbow joint (Tsutokkoboshi).

Many people looking into that part of the sky today insist that the stars of the Pleiades outline the Little Dipper. Not so, of course; at this time of year, the Little Dipper hangs down from Polaris, and is considerably larger than this cluster.

But so many people see a dipper there that I've decided to designate the Pleiades as the third and least famous of the Dippers: the "Dinky Dipper."