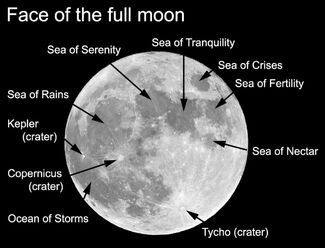 We know the lighter areas of the moon as mountainous or heavily cratered terrain of higher elevation, and we call them the "lunar highlands." The darker areas are roughly circular and cover much of the moon's face; they are known as "mare" or "seas."

Last week, the delicate crescent moon appeared in the west at dusk; this week we can look forward to seeing a brilliant full moon illuminating the east around the same time.

When the full moon rises around sunset on Friday and Saturday, April 15 and 16, many stargazers around the globe will be watching.

What most beginning sky watchers don't realize, however, is that a full moon is the worst time to view our nearest cosmic neighbor with a telescope, since the sun's direct rays cast few shadows on its surface, giving it a rather flat appearance.

Nevertheless, the eyes or binoculars can reveal some fascinating features. For example, notice that the lunar surface is not uniformly bright but, instead, has a mottled appearance. We know the lighter areas as mountainous or heavily cratered terrain of higher elevation, and we call them the "lunar highlands." The darker areas are roughly circular and cover much of the moon's face; they are known as "mare" or "seas."

This watery terminology dates to the earliest days of moon gazing, long before astronomers realized that our natural satellite is a dry, barren world nearly devoid of water. Today, we realize that these mare are huge plains of solidified magma that welled up from deep within the moon after violent impacts during its early evolution, and flooded the lowest terrain.

Many of these features still carry the poetic names of antiquity such as the Sea of Nectar and Ocean of Storms. Perhaps the most famous of these is the Sea of Tranquility, made famous by the Apollo XI mission that landed the first astronauts on the moon in July of 1969. It lies on its westernmost side and appears near the top of the rising moon.

It is the interplay between the lighter and darker areas that creates an illusion we call "the man in the moon." One lunar plain, the Sea of Serenity, marks one eye, while the Sea of Rains forms his other eye. A mountain range forms the bridge of his nose and, below, a collection of seas form his large, crooked smile.

At least, that's what I'm told; if you can make out a man's face from this maze of light and dark, you're doing much better than I. Outlining someone sitting in a chair reading a book, a long-eared rabbit – even a frog – is no problem, but I just can't easily make out the "man in the moon."

Watch the full moon this week and see which patterns you can find among its geological features. See if you can trace the profile of a ponytailed young lady wearing a diamond pendant. Why she looks to me like Wilma Flintstone is anyone's guess, I'll just leave it to all the amateur psychologists out there to figure out what this cosmic Rorschach test says about me!