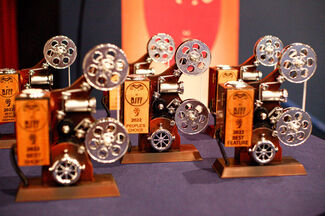 The 9th Annual Borrego Springs Film Festival was moving towards great success, as reported in the March 31 issue of the Borrego Sun, thanks mainly to the fine organization built by Festival founder Fred Jee. In summary of the entire Festival, from online scheduling and program brochure production through the galas and selected films, including free Library viewings and a free viewing day at BSPAC on the final day, I don't remember a single glitch.

I saw 28 films over the five-day Festival (five of them later won their genre in either Judges' Pick or Peoples' Choice), and all except one were very entertaining on one level or another. That one film disappointed me, but I will take its name and director to my reporter's grave. Foul language was repeated and gratuitous, and the visuals, story, and dramatic conflict in the dialogue left me flat; however, varying personal taste in films is always subjective, and I'm glad to have once again seen some really good films this year.

The opening gala at the De Anza Desert Club was spectacular – enthusiastic film buffs, food, drinks, and mingling with film directors and casts. Jee was his usual loquacious self with praise for the festival selections and casts and crew.

"We're here because we have something to show. We hope you like it, and we have faith that the films we share with you are something you will definitely respond to."

The trophy Awards at the end of the Festival were held in the Performing Arts Center, but many of the Judges' award recipients were absent. We received the list of judges' winners just prior to the publication deadline and published them, but not the list of Peoples' Choice winners; the awards ceremony wasn't over until after press.

People's Choice reviews are provided following the judges' winners below (director in parenthesis):

This was a great film, getting just right the certain perceived horrors of childhood nightmares in only 11 minutes. It received a perfect 30 on my scorecard because of both the black-and-white animation (hand-drawn, pen-and-ink) and the way it told an engrossing, complete story – without any dialogue! The film recounts how a young boy's teddy bear wages epic battles every night with a monster with needle claws who wants to kidnap the teddy's child, while his young master sleeps on obliviously. "It's a movie about purpose, beauty and, in the end, disappointment," says director Solé. However, the disappointment referred to is also a bit of inspired filmmaking (no winner, no loser) in that Mr. Ted and The Beast end the film side-by-side on barstools in some sort of détente. Perhaps a sequel will determine a clear winner, even if it's the boy himself, who will eventually outgrow both his teddy bear and the nightmares. I'll be looking for that sequel! Spoiler Alert: I guess it sent enough shivers down enough spines in the audience, also awed by the animation, to also warrant the Peoples' Choice Award for Best Animation.

I didn't see this film at the Festival, but I've seen the trailer and read preview material. On the outskirts of Islamabad in the Punjab region of Pakistan, near the eastern border with Afghanistan, a committed coach teaches a team of unlikely all-girl players, their families, and an entire community how playing Cricket can change lives. Ms. Khan definitely has a winner here, exploring the issues embedded within the challenges and aspirations of schoolgirls living on the outskirts of Islamabad, Pakistan.

This film also earned a perfect 30 score from me in the March 31 issue, simply because it shined so brightly in all of my admittedly subjective three major aspects of filmmaking: 1) Visual-Audio-Editing, 2) Storytelling with a discernable and compelling beginning, middle, and ending ; and 3) presentation of Dialogue-Desire Lines-Dramatic Conflict. Tough to do in only 12 minutes, but the BSFF judges also thought it top-notch according to their own criteria. In the final analysis, for me and perhaps them as well, it was the way Puertolas handled the late-emerging yet unspoken plot reveal, steeped in innuendo, that the elderly Frank was dying, leaving the legacy of his career, and the future of his granddaughter's happiness, up to his longtime puppet and symbolic partner, Emmet. It was nothing short of emotional and brilliant.

On the cusp of his college reunion, a lonely software exec goes to great lengths to prove he used to be good friends with a now well-known actress. I didn't see this film, either, but I read some online reviews, and the following one by Monica Castillo is representative. She writes:

"The film follows the hapless misadventures of Sid (played by well-known actor Tony Hale), a character so clueless he comes across like an even less capable Michael Scott from The Office. Somehow, he's become a VP in marketing, but it seems like the real pride and joy of his life is that he is organizing an alumni reunion for his alma mater, the University of Pennsylvania. While trying to reconnect with old classmates, he remembers the sorority sister of one of his former girlfriends (played by another well-known actor, Elizabeth Banks) and obsessively tries to reach out to her over Facebook to invite her to the reunion. Unfortunately for Sid, he didn't reach out over private messages, but posted publicly these personal updates and memories of that one time she yelled out "Eat Wheaties!" earning many repercussions and a restraining order for his actions.

"Hale gives Eat Wheaties his all. He commits to every flat bit, every borderline offensive joke and plays it for all it's worth. Hale uses his expressive eyes to blunder into his character's every mistake, hook, line, and sinker. He also can soften his gaze and look profoundly hurt, even when the damage is Sid's own doing. But Abramovitch doesn't quite strike the right tone for Hale's performance. The story gets even more implausible as it goes on, yet never moves on from making fun of Sid until the very end when he is given a victory lap for his troubles."

The Festival judges must have seen things a bit differently, and so did the audience in winning top Peoples' Choice honors, but that's the subjective nature of watching and assessing film quality.

Judging only by what I saw on the film trailer, an eerie, haunting music score presages the thriller-like nature of The Legend of the Hat. It is centered on an orphan, Susana, "who wakes from a nightmare and struggles between reality and fantasy. Unsure of who to trust, she maneuvers through a maze of events set up by Sombrerón, an evil being. She is frightened and dismisses warning signs as she seeks answers that only bring her closer to the darkness slowly surrounding her."

And now we move on to the BSFF People's Choice Awards:

A double winner! See review above of Judges' pick for Best Animation.

See extensive review of this exceptional and wholly inspiring documentary in the March 31 issue. I gave it 30 points, but then there's the bonus points for such an effort.

Another double winner. Something must have clicked with judges and the audience – Best Narrative Film AND Peoples' Choice! See my review above.

Matri, born in Dearborn, Michigan in the mid-60s and daughter of a mail-order Russian bride, tells the sad tale of growing up with a narcissistic mother and how Matri discovered the American Dream the hard way. Scott made the film almost completely with old super 8mm footage found at swap meets and estate sales; this unique style of film will leave you appreciating, by comparison, your own childhood.

In this 18-minute short film, a low-class law student struggles against his destiny – failure. He has to study for an exam, and since he can't concentrate, he goes to the Cósmico bar with the idea of having coffee and focusing. After witnessing the breakup of the waitress with her boyfriend, the girl and the student are left alone at the bar. Full disclosure here: Having not seen the film, in Spanish with no subtitles, I can only surmise from the trailer that the student does not fail with the waitress, and the two eventually hook up. Ah, attraction between the sexes, heavy sigh. Please correct me if I'm wrong about that!

The subtitled blurb for this film, "Come for the grief, stay for the show," said it all: A drama-comedy set in 1973 (a great period look in the film) with the tradition-based, strict, and always acerbic Serbian matriarch riding herd over a family forced every week to attend a picnic in a graveyard. It's a drama, for sure, but with many comedic moments. The best laugh-line of this or any film at BSFF I saw comes from 11-year old Suzana when grandmother begs out loud to her departed husband, "Take me with you!" Suzana responds with a sure-to-be-classic short prayer and laugh-getter of her own, "Make Gramma's wish come true."

This film also scored 30/30 points on my tally sheet because of the fine acting by the entire cast, with special mention to Suzana Norberg, the writer of the film who plays the grandmother, cleverly disguised by great makeup and costuming. The film is a true story about her actual childhood, and both she and director Devin Scott, who made the look and feel of the film come alive for an appreciative audience, accepted the award.

We can only hope that the 10th BSFF is as smooth-running and entertaining on so many levels as this one.